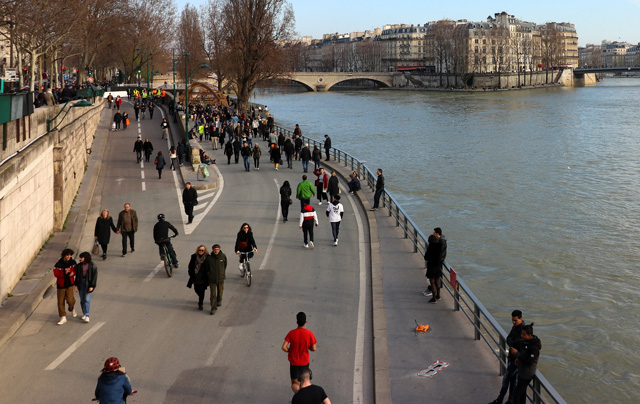 Re-election gives Mayor Anne Hidalgo a mandate for more pedestrianization efforts like the transformation of the Seine riverfront. Photo by Joan/Flickr

With her recent re-election, Paris Mayor Anne Hidalgo (Editor’s note: no relation to the author) has won a mandate to continue profound mobility transformations in the French capital. Her re-election manifesto promises an even more ambitious second term, furthering her efforts over the past six years to curb pollution, to prioritize pedestrian space and sustainable mobility, and to shape a greener, safer, healthier city.

Hidalgo’s “15-minute city” is a strong break with traditional modern urbanism. Her vision is boldly mixed-use, with employment, commercial, social and cultural activities all existing in close proximity to housing. It’s also been key to helping Parisians adapt to the COVID-19 pandemic, with its focus on opening street space for pedestrians and cyclists. But the city is also bolstering itself against future climate impacts and worsening air pollution as much as against the current crisis.

Permanent Pedestrianization of the Seine

In 2002, under Mayor Bertrand Delanoe, Paris began installing temporary beaches each summer on the left bank of the Seine for recreation and expanded this to the right bank in 2006. This Paris Plages initiative proved a popular outlet for residents and visitors alike to enjoy car-free public space.

When Hidalgo took office in 2014, she proposed pedestrianizing the riverfront permanently to dedicate this public space at the heart of the city to pedestrians, cyclists and other car-free activities – and to be a symbol of the city’s transformation under her administration. The measure was implemented in 2016 but received strong opposition and legal challenges from conservative and vehicle lobby groups. Finally, in 2018, a local court upheld Hidalgo’s policy and affirmed that the riverfront could remain car-free.

Experimental play, music, relaxation in the sun and space for activity. Just a few key indicators of thriving public life, seen on the banks of the Siene, that will continue now that Mayor @Anne_Hidalgo’s car ban is officially permanent #FilmFriday pic.twitter.com/Z3HiJOe8KB

Pedestrianization will continue in many areas of the city over the next six years, according to Hidalgo’s public plans. More space will be given to pedestrians and bikes, taking away space from cars, particularly parking (72% of the city’s on-street parking spaces are set to be removed).

Unlike other cities in northern Europe, Paris does not have a strong cycling tradition. In 2010 bicycle trips accounted for just 3% of all trips in the city, compared to 37% in Copenhagen and 33% in Amsterdam. Nevertheless, Paris has supported cycling in recent years, including by launching one of the most recognized city bike-share systems, Vélib’. Rolled out in 2007 with 750 stations and 7,000 bicycles, the system now has nearly 1,400 stations and 20,000 bicycles, including 30% e-bikes. Although transition to a new operator in 2019 was difficult, it is improving over time and is a key part of Hidalgo’s plan to make Paris a cycling city.

In her first term, Hidalgo promised 1,000 km (588 miles) of permanent bike lanes. As of December 2019, the plan was just over half completed. During the COVID-19 pandemic, the city introduced plans for an additional 50 kilometers of rapid, pop-up bike lanes to reduce occupancy in mass transit. The health emergency has also allowed the city to speed up existing projects, like closing car traffic along the Saint-Martin Canal.

Over the long term, Hidalgo has said the city will continue the construction of bike lanes as well as a slew of other small policy changes, including allowing counterflow bicycle use on 30 km/h (18 mph) one-way streets, creating 10,000 new bicycle parking places, and providing a 400-euro stipend to help eligible families purchase cargo bikes.

By the end of 2020, 85% of central Paris will have a 30 km/h speed limit, excluding wide avenues like the Champs-Élysées and Boulevards des Maréchaux, which will be capped at 50 km/h. The city also plans to transform its congested ring road by lowering the speed limit from 70 km/h to 50 km/h, building a priority lane for shared transport, reducing the number of traffic lanes, and making it safer for pedestrians and cyclists to cross. In her manifesto, Hidalgo says she wants to remake this road into a “peaceful urban boulevard” and “gradually erase this frontier of another age.”

As well as reducing air and noise pollution for those who live and work around the ring road, these changes aim to improve road safety, particularly among vulnerable road users like pedestrians and cyclists. Studies have shown that speed is the single biggest factor in the severity of road crashes.

In 2016, following years of escalating air pollution and congestion, Hidalgo prohibited the circulation of all gas-powered vehicles manufactured before 1997 during weekday hours, and in 2018, diesel vehicles manufactured before 2001 were added to the list. Even before then, the city – which has pledged to be carbon-neutral by 2030 – had already decided to permanently phase out diesel vehicles by 2024 to host a pollution-free summer Olympics, and to phase out gasoline-powered vehicles by 2030.

This, of course, has generated pushback from car users and the car industry, but Hidalgo’s re-election gives her a healthy mandate to carry out this promise in the years ahead.

As COVID-19 has upended urban transport networks the world over, the example of Paris could be replicable in many places. Transformation takes persistence and political will, qualities that Hidalgo has shown in spades, but leaders like her demonstrate how changing a megacity into a sustainable, safe and healthy environment can be done.