SARSAI is a finalist for the WRI Ross Prize for Cities.

Chaos often reigns on the streets of Dar es Salaam, Tanzania’s capital. Minivans, cars and motorcycles careen along half-finished roads without markings, sidewalks or traffic lights. Pedestrians walk single-file within reach of speeding vehicles. Groups of children in matching school uniforms hold hands as they linger at the road’s edge. They scan for breaks in traffic and dart across before the bell rings for the start of class. Every day, this journey puts their lives at risk.

Some of Dar es Salaam’s highest-risk schools see more than 12 students injured or killed in road crashes every year. The city’s skyrocketing population, increasing car ownership and haphazard development have combined to create perilous commutes for school children. While road safety is a global problem ‒ more than 1.35 million people die in crashes every year and the total is only getting higher ‒ children in sub-Saharan Africa are more than twice as likely to die in a road crash than kids in other parts of the world. In cities’ poor neighborhoods, the odds are even worse. 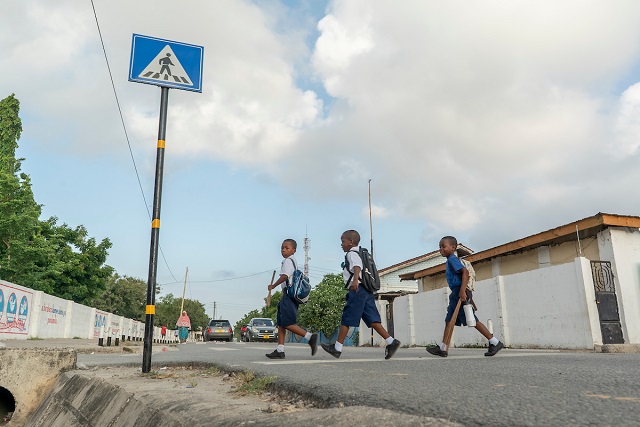 Children in sub-Saharan African are twice as likely to die in a road crash than kids in other parts of the world. Designated crossings like the one above help make students’ walks to school safer. Photo by Kyle LaFerriere/WRI

Amend, a global road safety nonprofit, is working to save children’s lives by changing the roads they traverse. The School Areas Road Safety Assessments and Improvements (SARSAI) program targets schools with the highest rates of student injuries and creates corridors of improved safety between children’s homes and their schools.

“Road safety does so much more to a city than just keep people safe,” said Ayikai Poswayo, SARSAI program director at Amend. “It determines how a city operates, how the people within a city feel.”

Communities and local authorities are active participants throughout SARSAI’s process. They help Amend gather data on traffic and pedestrian counts, speed surveys and measurements by explaining their specific challenges and dangerous hotspots. Once identified, Amend implements measures with local road authorities. They install speed bumps, footpaths, traffic calming measures and other infrastructure on nearby roads. Sometimes they even create new entrances to schools to help kids avoid especially dangerous areas. Then they work with the students to teach them safer pedestrian behavior. 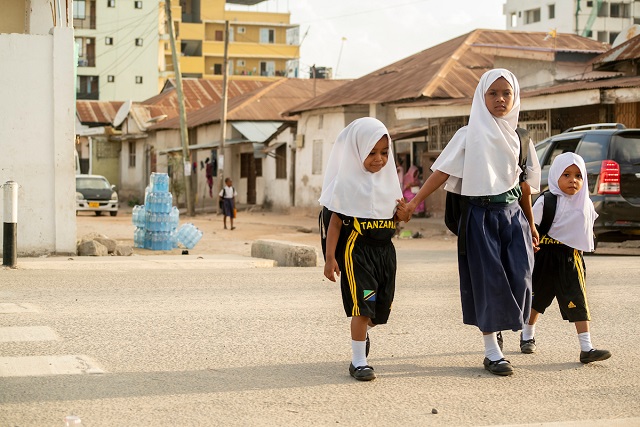 The SARSAI program helps make it safer for children in Dar es Salaam to walk to school. Photo by Kyle LaFerriere/WRI

These simple solutions ‒ which cost only about $25,000 per school ‒ are already reshaping Dar es Salaam. SARSAI has helped more than 38,000 students there to date, as well as many more family members, who worry less about their children’s walks to school, and neighbors, who benefit from safer pedestrian infrastructure.

One motorcycle taxi driver said street alterations have changed the way he drives. “Before, we used to fear that we would hit them [students],” Yasini Tahwa told WRI. “Now when we reach the zebra crossing, we wait for them to cross first before we pass.” 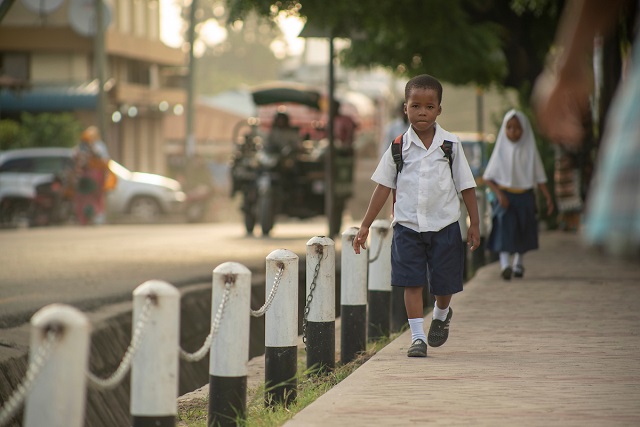 Protected footpaths create a safer environment for children as well as other pedestrians. Photo by Kyle LaFerriere/WRI

Data is at the heart of what makes SARSAI effective. To achieve maximum impact with limited resources, Amend’s engineers and statisticians first survey a city for the most high-risk school areas. Then they build out from there, selecting physical interventions that best fit the area.

Poswayo and her team carried out a peer-reviewed study of SARSAI with the U.S. Centers for Disease Control and Prevention in 2015 and 2016. Compared to a control group, the schools with SARSAI experienced 26 percent fewer traffic injuries, while vehicle speeds in school zones dropped as much as 60 percent. It is the first peer-reviewed method of its kind proven to reduce road traffic injuries and death in the region. 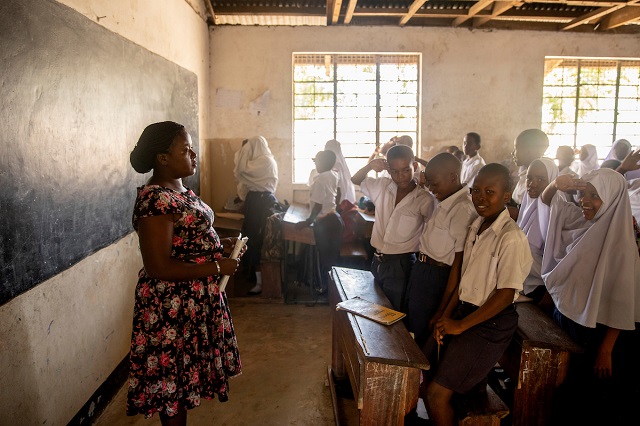 Mikumi Primary School, one of several in Dar es Salaam that have worked with SARSAI to improve student safety. Photo by Kyle LaFerriere/WRI

The impact of SARSAI goes beyond the numbers, helping children understand that their safety, mobility and freedom in the city matters. Children also internalize the importance of a safe environment and are encouraged to support road safety going forward.

“As a parent, now I am very happy,” said Didace Kamugisha, a PTA secretary at the Mikumi Primary School. “This has not only helped the students, but also residents who use the road.” 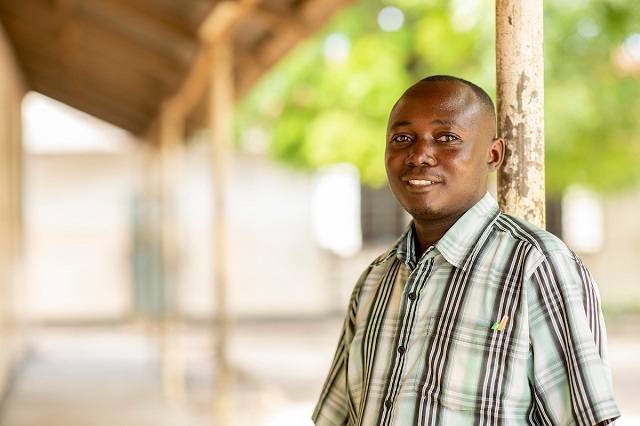 Sowing the Seeds of Change

“The fact that the interventions we implement are very simple and affordable means that they can be replicated basically anywhere in the world,” Poswayo said.

Amend started SARSAI in 2012 with a one-year grant of $100,000 to work with two schools in Dar es Salaam. It’s now expanded to 26 other high-risk school areas in the city, covering 60 percent of the highest-risk schools, as well as eight more cities in eight countries.

In Lusaka, Zambia, Amend is partnering with the mayor’s office. In Accra, Ghana, the organization is working to create a pedestrian action plan. Elsewhere in Tanzania, Amend is helping the World Bank incorporate SARSAI’s principles into the design of new roads in eight cities. Amend has even partnered with UNICEF to share its methodology with the city of Kingston, Jamaica. 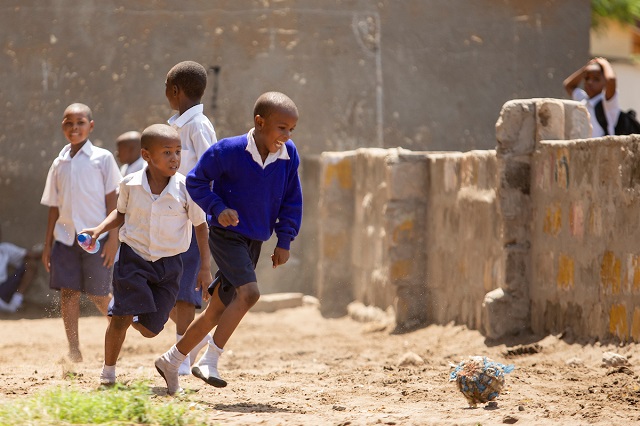 Children play in the schoolyard of Mikumi Primary School. Photo by Kyle LaFerriere/WRI

Improving the city for some of its most vulnerable residents fundamentally changes the fabric of a city. It weaves together a community that includes parents, families, teachers, youth and local leaders, reimagining how public space is used in daily life. Starting with a focus on school children ‒ such a visceral and immediate concern for so many ‒ allows for a broader conversation about building cities that are better for everyone.

“What SARSAI does is to look at our cities from the angle of the child pedestrian,” said Poswayo, SARSAI’s program director. “If we can design our cities from that angle, we would be designing it for the safety and security of all.”