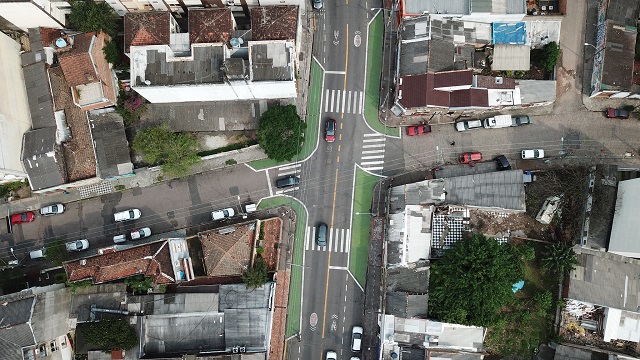 An intersection on João Alfredo Street in Porto Alegre, Brazil, that was redesigned during the second phase of a tactical urbanism project. All photos by WRI Brasil

In April 2019, Porto Alegre worked with WRI Brasil to implement the first segment of a tactical urbanism project that transformed a key intersection of busy João Alfredo Street, which runs through the heart of the Cidade Baixa neighborhood. The goal of the “complete streets” pilot project was to improve safety and infrastructure for pedestrians and cyclists, and create a more livable public space.

We’re pleased to report that after positive local feedback, the city and WRI Brasil extended the intervention to the rest of the street over the next several months. This time, we focused on evaluating the intervention’s impact on speed reduction – a key factor in reducing road traffic deaths and injuries – and partnering closely with the community in the redesign process. 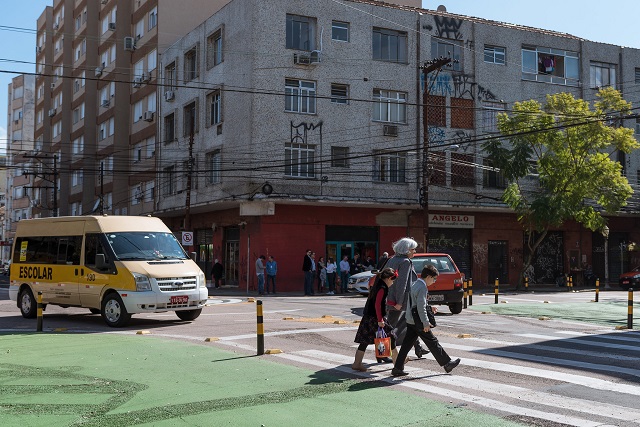 First, new painted curb extensions were added. These make road lanes narrower, helping to slow traffic speeds and reduce crossing times for pedestrians. These changes are especially important for improving the safety of the elderly and children, and the neighborhood has several schools.

Two months after the intervention, when drivers had become used to the new street design, WRI Brasil measured speeds at three intersections and compared them with measurements from 2017 made by the municipality. The speed reduction was impressive. The average speed of vehicles approaching the intersections varied from 10-19 miles per hour, down from 25-32 miles per hour during free flow conditions at the same intersections three years ago. 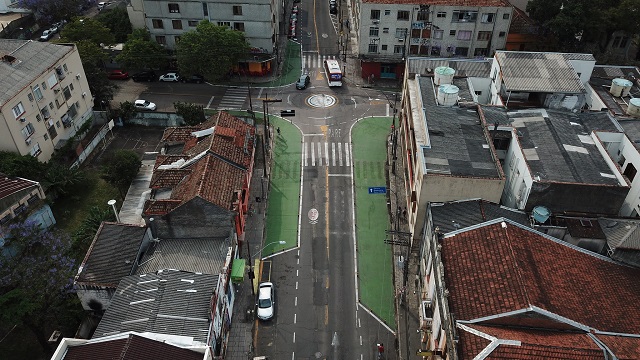 After the completion of the painted sidewalk extension and installation of new road signage, bollards and studs, WRI Brasil and the municipality worked with the non-profit organization Engineers Without Borders and a neighborhood carpentry school to build urban furniture. The mayor’s wife, Tainá Vidal, even joined on a visit to the carpentry school, as students created lounges out of pallets donated by local construction companies. Street furniture creates a more active streetscape by establishing more space for people to relax and spend time in public space. 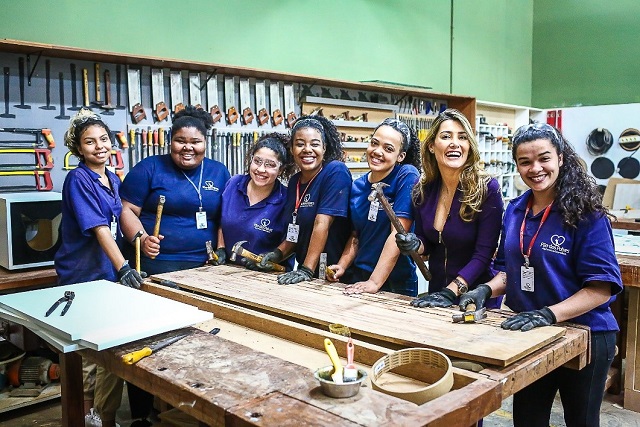 In November 2019, the deployment of the street furniture marked the completion of this second stage in João Alfredo’s tactical urbanism intervention. To celebrate the occasion and promote the new space as a safe, accessible area for all members of the community, the city temporarily shut down traffic to the area for an open street event. 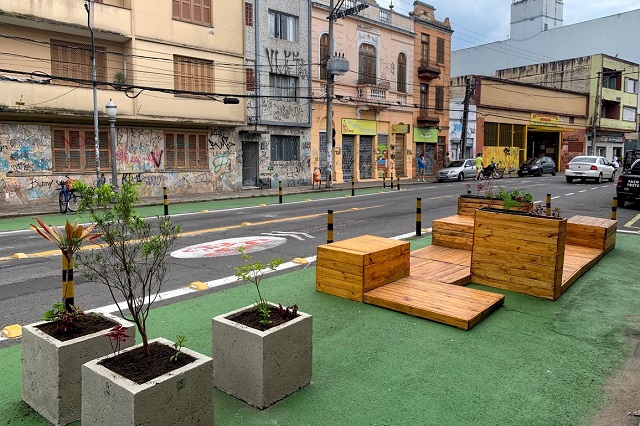 As with the first open street event in March 2019, residents participated in various activities designed to encourage the new possibilities for the street. They painted the redesigned roundabout that had replaced a dangerous intersection, planted trees in new street vases and learned more about road safety. 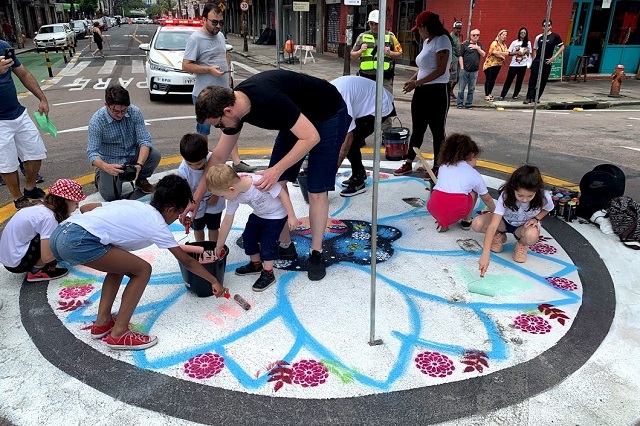 Mayor Marchezan attended the event, not only giving an official boost to the project but providing a valuable opportunity for the community to discuss other needs for the neighborhood. The students who built the street furniture spent time with the city officials and exchanged ideas, building an encouraging relationship between the city and its young people and laying the groundwork for future inclusive community development. 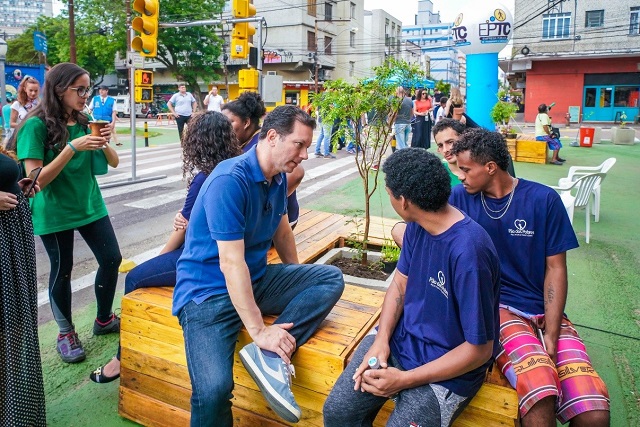 The city also received donations of benches to be spread along the rest of João Alfredo. In spaces that used to have people only passing by, individuals and families began to spend more time, enjoying the street’s safer, more welcoming design. 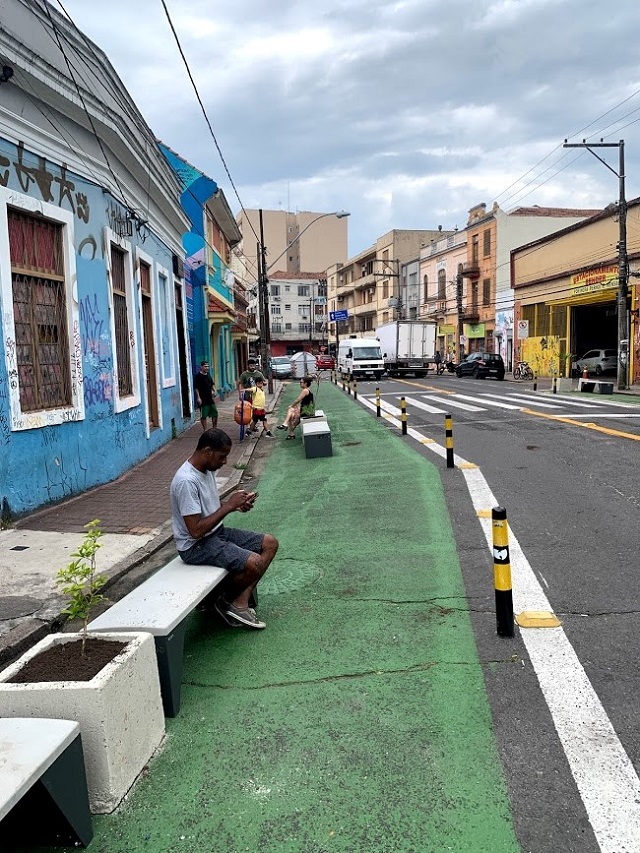 Porto Alegre is 1 of 20 cities participating in a national network to pilot complete streets projects under the Complete Streets Program, created by WRI Brasil in partnership with the country’s National Front of Mayors. São Paulo, Salvador, Juiz de Fora and Campinas have completed similar complete streets pilots, and many other cities have projects in the works for 2020. 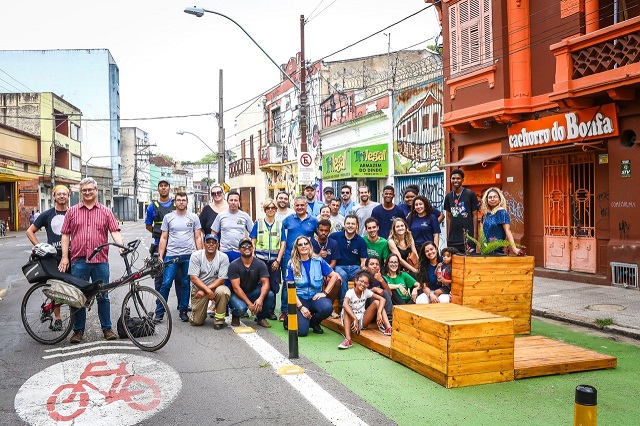 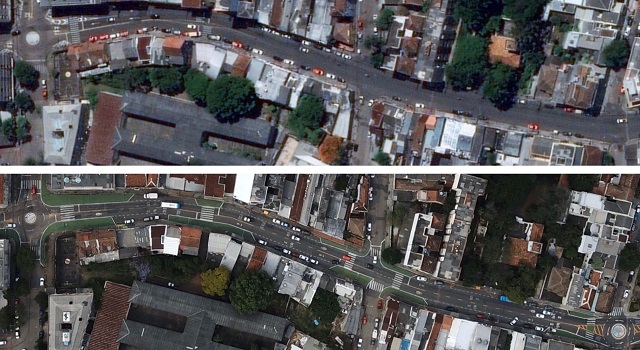 Andressa Ribeiro is an Active Mobility Analyst at WRI Brasil.