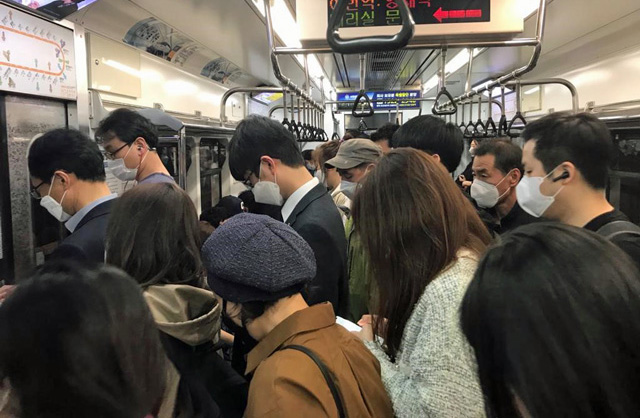 A crowded Seoul metro car on May 6, 2020. Photo by Youngmin Chang/CityNet

In many cities, lockdowns have forced large numbers of people into an impossible dilemma: follow social distancing guidelines or be deprived of their livelihoods and basic services. Unlike most places, South Korea and its capital, Seoul, took a markedly different approach to containing the coronavirus. Many public institutions were closed, but businesses were not required to shut down. Yet as of May 15, the Seoul metropolitan area had just 725 confirmed cases and 4 deaths – despite being home to about a quarter of the country’s 52 million residents. The entire country of South Korea has 10,806 confirmed cases of COVID-19, with only 255 deaths.

Why was the city so successful at reducing deaths? Seoul focused on an approach emphasizing transparency, accountability and solidarity, instead of strict movement restrictions. In practice, this meant widespread testing, rigorous contact tracing and mandatory isolation of severe cases – a strategy that allowed Seoul to tackle the pandemic without losing sight of its vulnerable populations or disrupting its economy as severely as elsewhere.

During past epidemics, epidemiological tracing of patients was time consuming and involved many “boots on the ground” and an accompanying paper trail for each patient that could take time to process. Technological advances now enable tracing patients’ location history much faster, using their mobile phones, credit card usage and surveillance cameras in public places.

As a result of lessons learned from the earlier MERS outbreak, South Korea had already made the tracing of patients during an emergency situation legal through mobile phone data, credit card transactions and CCTV footage. In Seoul, these data are not only scrupulously collected for known COVID-19 patients, but they are shared publicly through a web portal and text message system. Follow-up actions are taken by the Seoul Metropolitan Government, including disinfecting all public places a confirmed patient visited.

A Self-Quarantine Safety Protection App provides data to both patients and the community on patient health status and movements. Those who violate self-quarantine regulations, as determined by tracking their movements through cellular GPS data, credit card transactions and CCTV recordings, are asked to wear a safety band with a real-time location tracking device, or to relocate to a temporary living facility. In addition, an automated call monitoring system regularly checks on patients to determine whether their symptoms are changing. The accumulated data is analyzed using artificial intelligence to help authorities better understand the disease’s spread.

Provided patient privacy is adequately safeguarded – a criticism leveled at South Korea’s response by some, who noted that individuals could sometimes be identified through this data – this level of transparency has enabled the city to avoid instituting strict movement restrictions. Generally speaking, only public institutions, such as government facilities, schools and museums, were closed completely. Private businesses remained opened; social distancing was not mandated by law but strongly encouraged.

In the case of a pandemic, accountability is as much about sharing information as it is figuring out appropriate solutions. Seoul’s city government relied on several measures to increase accountability.

South Korea was able to roll out extensive COVID-19 tests across the country, including at contact-less drive-through testing sites where the whole process can be completed in under 10 minutes. Walk-in screening clinics, about the size of a telephone booth, are also available for those who might not own cars. Overall, 726,747 people have been tested thus far, amounting to roughly 1.4% of the nation’s population.

The detailed travel log of confirmed patients has been electronically maintained and provided to the public, leading to some innovative uses, like an app that alerts users when within 100 meters of a location recently visited by an infected person. Self-quarantine rules were not only imposed on confirmed patients but those persons coming from abroad.

Solidarity through city-wide stakeholder engagement in these efforts was aided by building trust between the city and national government and the community. Many of the actions taken to halt the spread of the pandemic were intrusive, and it was necessary to secure the full confidence of residents that the government was a credible trustee of their individual and collective welfare during these trying times.

Constant and relevant communications are a key part of this strategy. The Seoul Metropolitan Government communicated publicly through promotional posters on social distancing and specifically targeted religious organizations and schools. Internet devices and laptops were loaned to students from low-income communities so that they could remain connected with schooling.

Community trust was strengthened by targeted financial assistance to vulnerable communities whose income streams were most disrupted through lockdowns and social distancing. The city government provided between $300 and $500 in emergency living expenses for low-income workers in the form of gift certificates or pre-paid cards that can be used until the end of August. Small businesses were also given cash support to pay for rent and labor costs. This policy is expected to benefit 410,000 people, or more than 70% of small business owners in Seoul. In addition, up to $500 equivalent per month is paid to those on unpaid leave.

Seoul’s innovative response to the pandemic was possible because the city had invested in institutional structures professionally managed to respond to any public health emergency before the crisis occurred. The country’s experience with MERS meant it had laws in place to allow for rapid deployment of testing kits and aggressive contact tracing. Seoul’s Civil Health Bureau is headed by a senior city official specifically charged with tracking public health outcomes. Equally significant is the investments in digital data infrastructure and city leaders’ confidence in relying on the advice of public health professionals, supported by credible data analytics to guide decision-making. Each city’s circumstances are different, but the fundamental strengths that enabled Seoul to be so nimble and effective in its response are a lesson to cities everywhere.

This blog is based in part on a recent webinar interview conducted by the CityNet Secretariat with Cho In Dong, Seoul Deputy Mayor for Planning and Coordination, and Na Baeg-ju, Director-General of the Civil Health Bureau. The official English translation is available here.

Vijay Jagannathan is Secretary General of CityNet and a Senior Fellow at WRI Ross Center for Sustainable Cities.