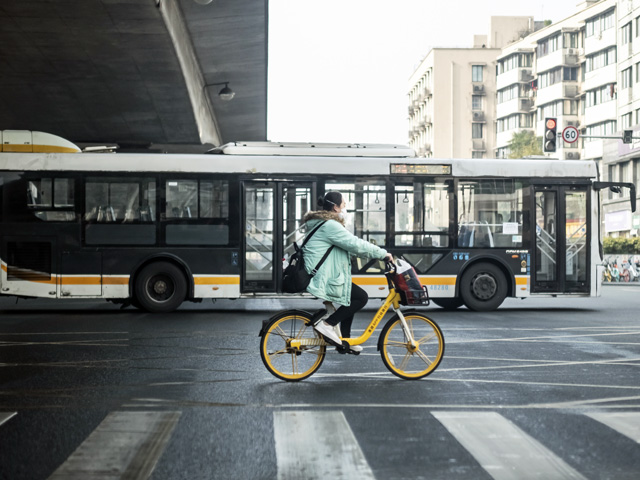 Ghost-like cities with deserted metro cars and empty buses have been a vivid manifestation of how COVID-19 has affected society worldwide. As elsewhere, public transport ridership in Chinese cities dipped precipitously during the early days of the pandemic. But as the outbreak in China has been gradually contained and people begin to return to work, China’s cities are re-opening transport systems and finding that the extended lockdown period both accelerated and ushered in new changes across the sector.

China’s public transport systems have been hit hard by COVID-19. During the lockdown period in February, 27 Chinese provinces and 428 cities suspended transit completely.

As services are restored, ridership is returning in some places, but not to full levels. According to a survey conducted by the Institute for Transportation and Development Policy in early March in the megacity of Guangzhou, only 34% of previous metro and bus commuters were using public transit systems, while 40% had shifted to private cars, taxis and ride-hailing, and the rest to walking and biking. In Hangzhou, the provincial capital of southeastern Zhejiang province, a survey at the end of March found the municipal bus system had recovered 50%-60% of regular ridership.

To mitigate public health risks while maintaining the mobility services residents need, local governments and public transport operators are implementing a host of precautionary measures. As per new technical standards developed by the Ministry of Transport and currently under review, in high-risk areas like Wuhan, frontline personnel will be required to be equipped with protective materials such as masks, goggles and suits, and many have been trained to prevent cross infection between staff and vehicles.

New spacing guidelines have been implemented on some buses to ensure safe distances between passengers. Every operational bus is also required to be disinfected at least twice a day (once before leaving the depot and once after returning) and more in higher risk key areas, such as routes starting from airports. Passengers’ temperatures are also checked before boarding.

Some municipal bus operators, like in Beijing and Shenzhen, are also encouraging people to use traceable payment methods like WeChat, Alipay or transit smart cards, instead of cash. These payment methods not only cut down on exposure risks, but also help local authorities trace possible contacts and quickly inform passengers and relevant communities if a passenger is diagnosed with COVID-19. Shanghai has put QR codes in its buses and is encouraging passengers to scan and register their contact information.

Chinese cities have also adopted data-driven tracking and scheduling systems that may fundamentally change the future of transit operations. In Suzhou, the pilot city of WRI’s Transit Metropolis Project, a smart transit platform analyzes crowd distribution inside buses in near-real time and identifies the volume of passengers in each vehicle through smart transit cards. The system proved helpful during the COVID-19 outbreak, when the vehicle occupancy information was made available to the public to allow the staggering of travel time and is now helping the city monitor a slow return to normal.

Bus operators have also introduced new, on-demand shuttle bus lines during the outbreak to run in addition to fixed-route services and help essential workers get to their jobs. Powered by mobile apps, these lines were developed specifically to serve new commuting patterns. Once a threshold for demand is passed, a route is created based on starting and ending locations with reserved seats for all passengers. By the end of March, the Beijing Public Transport Group had opened 173 customized routes based on a massive survey among companies and the general public.

Unlike public transport, the pandemic actually reignited interest in dockless bike sharing, an industry that had been experiencing a notable contraction in China. During the 50-day public transport lockdown in Wuhan, Meituan Bike (formerly Mobike) provided a remarkable 2.3 million trips in the city. As China’s economy re-opens, bike sharing appears to be back on the rise. According to Meituan and two other major bike-share companies, Hello-Bike and Didi Bike, ride volume in Beijing has increased 120-187%, compared to before the pandemic.

Local municipalities and companies have encouraged this trend and taken steps to ensure bike sharing’s accessibility and safety. Meituan took the initiative to disinfect all bikes on the street in the cities they operate regardless of the brand, and other companies have followed. Meanwhile, city regulators such as the Beijing Municipal Commission of Transport have banned bike-sharing companies from increasing prices during the pandemic.

It seems increasingly likely that this surge in biking is more than a temporary phenomenon. Evidence suggests that cyclists are riding longer distances directly to their final destinations, not just for first- and last-mile connections. Beijing cyclers average 2.4 kilometers per ride, a 69% increase from pre-pandemic. Hello-Bike data also suggests that at the country level, long distance rides (more than 3 kilometers) have almost doubled compared to last year.

Evidence shows that bike users are highly price sensitive, however; so to maintain and keep the number of cyclists rising, cities need to consider how to work with bike-sharing companies to keep prices low and business profitable at the same time. Feeling safe is also important for riders, suggesting cities may need to invest in safe cycling infrastructure to protect riders as motor vehicle traffic returns.

The outbreak of COVID-19 has spurred a boom in medical and home deliveries. According to the China Federation of Logistics and Purchasing, although China’s total freight values dropped 12% in January and February as lockdowns took hold, essential supplies to workplaces (hospitals included) and residents increased 3%. The increased demand is a challenge amidst inefficient existing freight operations and widespread road closures.

China’s freight sector is a highly competitive and fragmented market with low efficiency. Deliveries are often fulfilled by local “mom-and-pop” carriers with tiny fleet sizes. Lacking integrated information systems to understand demand and design efficient distribution strategies, these carriers are inefficient and generate high emissions. According to the International Council on Clean Transportation, empty trips account for 15-40% of all miles traveled in China’s freight sector.

In such a market, meeting urgent and large demands for medical supplies and life essentials has been difficult. Cities like Shanghai and Wuxi introduced “non-vessel operating common carriers,” also known as forwarders, that combined small shipments from small carriers into larger loads. An information system then guided these small carriers to their end destinations for more coordinated and efficient deliveries. The Ministry of Transport has encouraged forwarders to use big data to identify demands, optimize operations and track deliveries. Initial pilot projects show that such measures can reduce operating costs and effectively increase vehicle utilization – and thus reduce societal costs too.

Besides changes in freight operations, the pandemic may also lead to changes in freight vehicles. To tackle issues with road closures and exposure risks, contact-less, last-mile deliveries have been prototyped using autonomous, electric delivery robots. For example, Jingdong Logistics, a package delivery firm, performed last-mileage delivery to a hospital in Wuhan using autonomous robots. Although widespread adoption still requires substantial legislative and regulatory enablers, this potentially low-emission solution could be a glimpse into the future.

China’s urban transport sector has given rise to major disruptions in recent years, including ride-hailing and bike sharing. As the country – and the world – looks for ways to recover from COVID-19 lockdowns, changes to operations and technologies here may be harbingers of changes to come elsewhere. It is crucial to maintain the fiscal health of public transport systems and look for “win-win” investments in economic recovery and a low-carbon future.

Listen to WRI’s Ben Welle and Sergio Avelleda discuss public transport recovery from COVID-19 during a webinar in the Build Back Better Series.

Lulu Xue is a Research Associate for WRI China Ross Center, where she supports sustainable transport efforts in Qingdao and Chengdu.

Tina Huang is a Research Analyst in WRI’s Climate Program.