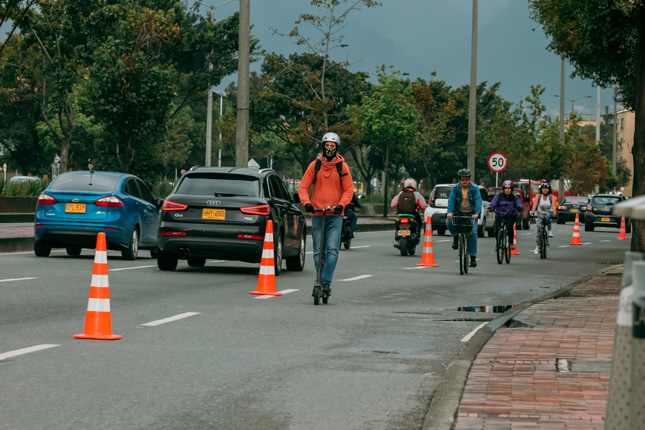 As the world works to stop the spread of the COVID-19 pandemic, more than 3.9 billion people are under full or partial lockdown orders, as of mid-April. Cities have curtailed many public transit operations because of declining ridership and health concerns. While these measures are essential for preventing the spread of the disease, they present challenges for the many people who still need to get around cities for essential tasks like buying food or caring for a loved one. And mobility for essential workers like health care providers is more important than ever.

Some evidence suggests many people are turning to cycling as a resilient and reliable option to fill the gap. Many urban cycling networks have seen a surge in traffic, including in China, Germany, Ireland, the United Kingdom and the United States. In Philadelphia, cycling has increased by more than 150% during the COVID-19 outbreak. Some governments are responding to the spike in demand by opening emergency bike lanes and giving essential workers personal access to their own bikes from shared fleets.

At a time when city leaders are rethinking many past assumptions, this trend is a unique opportunity to embrace cycling as an integral part of urban transport systems – not just as an accessory. Cities need more resilient, more equitable mobility – not only to weather the current storm, but to prepare for future crises.

Amidst COVID-19 Lockdowns, Cycling Emerges as a Resilient Way to Stay Connected

Throughout the two-month lockdown of Wuhan, China, ground zero of the COVID-19 outbreak, volunteers used bicycles to deliver necessities to residents stuck at home. Some bikeshare companies amped up sanitizing efforts and made their services free of charge to allow access to medical workers and those with urgent needs.

From January 23 to March 12, Meituan Bikeshare, formerly known as Mobike, provided about 2.3 million trips in Wuhan, according to its own data collection, accounting for more than half of all non-walking trips in the city during the epidemic. A total of 286,000 people used the service, with a total cycling distance of more than 2 million miles, equivalent to 81 laps around the equator. Meanwhile, the average daily distance for a single ride increased 10%, showing an increased reliance on bicycles for longer trips.

Similar trends are evident in other cities around the world. New York City’s public bikeshare system, Citi Bike, saw a 67% surge in demand in early March compared with the same period last year. Chicago and Philadelphia saw ridership in their bikeshare programs nearly double during March. One of Philadelphia’s major bike trails experienced a 470% increase in traffic. London issued special guidance for new riders and, before lockdowns shut down all non-essential shops and traffic, bike shops in Dublin were seeing more business than ever.

Some cities are temporarily or permanently expanding cycling infrastructure in response to COVID-19. Bogotá experimented with opening up its 22-mile Ciclovía network, a system of streets normally closed to cars on Sundays, during other days of the week. In a pilot project conducted with NUMO, the New Urban Mobility alliance, the city and a private bike operator are also lending e-bikes to health care workers.

Philadelphia responded to a public petition to create more space for cyclists and pedestrians to operate safely by closing a large 4.4-mile road segment to motor vehicles. Mexico City proposed plans for 80 miles of temporary bike infrastructure to alleviate the risks of public transportation use and facilitate mobility in the megalopolis of more than 21 million people. Berlin recently implemented a 1-mile temporary bike lane along a major road and has plans to expand the pop-up infrastructure, along with 133 other German cities. Oakland, Minneapolis, Denver, Louisville, Vancouver and Calgary have implemented similar measures. New York City committed to adding close to 1 mile of temporary protected bike lanes to segments of Manhattan and Brooklyn, and testing road closures to cars.

Cycling is providing a critical lifeline to many cities during a critical time. But it’s also a resilient mode of transport that can continue to provide valuable benefits to cities in the future, too – benefits that go beyond mobility.

The global economic impact of the coronavirus crisis is already severe and expected to worsen. Many governments are contemplating massive infrastructure projects that can generate jobs and economic activity. There is a strong case – for the environment, public health and the economy – to avoid projects and infrastructure that cause more burning of fossil fuels. Investing in infrastructure to support biking – from protected lanes, to mass parking facilities to bikeshare programs – is exactly the type of win-win investment that will help economies recover while curbing climate change, reducing air pollution and protecting human health.

As social distancing eases and people can return to patronizing local shops, cafes and restaurants in-person, bicycle use can also provide proven stimulus to economic activity on main streets and commercial areas. Studies have shown that cyclists spend on average 3 times more than car drivers with local businesses, and that cycling infrastructure is correlated with higher retail sales.

2. Biking can improve public health and quality of life

Cycling positively impacts everyone’s health by improving urban air quality. Regular cyclists enjoy the benefits of consistent exercise; they have a 40% lower chance of getting cancer, are 40% less likely to die prematurely and are more than 50% less likely to have heart disease. One study has shown a 15% increased risk of fatality from COVID-19 in areas with higher levels of air pollution, likely due to poorer lung health. Cycling offers a way to reduce local air pollution and increase physical activity, which improves individual resilience.

Bicycle access is already proving key to people operating under constrained economic and transportation conditions. The increased mobility offered by cycling during power outages, natural disasters or other disruptions to urban transport systems is significant, providing a service area that can be 15 times larger than walking alone.

Embracing Cycling as a Response to Crises

The Netherlands is one of the world’s most successful cycling nations. The country is home to more than 23,000 miles of protected bike lanes, and more bicycles than people. A quarter of all trips are made by bicycle. The Netherlands is also one of the safest countries to be a biker, with an annual cyclist fatality rate of just 1.1 per 100 million kilometers cycled (compared to 5.8 in the United States).

This status was never a given. Change sprang in response to a road safety crisis, particularly among children, and the OPEC oil embargo in the 1970s. The government announced car-free Sundays in 1973, and the country slowly began to reevaluate its relationship with cars.

In a more recent case, cycling proved to be a resilient and reliable mode of transportation during the 2017 earthquake in Mexico City. After the devastation of thousands of buildings left many roads inaccessible to motor vehicles, the city depended heavily on personal bikes and its bikeshare system for first responders and volunteers bringing first aid and supplies.

COVID-19 is another crisis that challenges cities everywhere to think about how urban transport networks might operate differently. It’s a time for cities to experiment, using their streets as testing grounds for change. For instance, WRI Ross Center is working with NUMO and Populus, a company that provides mobility data and tools to cities, to measure improved access to job opportunities and essential services like hospitals and grocery stores with newly expanded networks of temporary bike lanes.

Today’s COVID-19 lockdowns could reveal solutions that have far-reaching benefits for cities long into the future, pointing the way to more resilient, accessible and safe urban transport. A city with more cycling is a city with healthier people, safer streets, cleaner air and better connectivity.

Wei Li is a Research Analyst and Transport Planner at WRI China.

Lucas Harms is the Director of the Dutch Cycling Embassy in Utrecht, Netherlands.