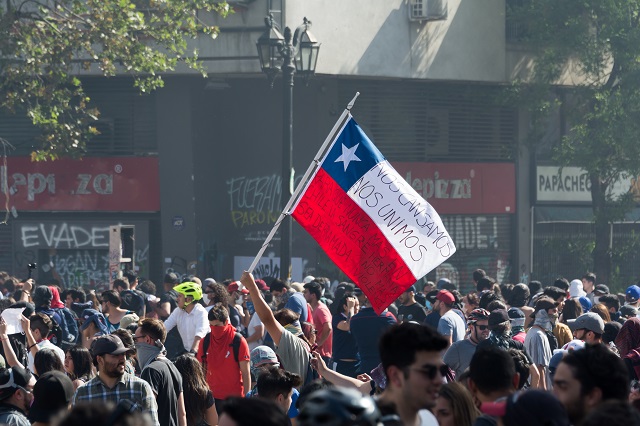 Ongoing protests against inequality in Chile highlight the link between climate and social equity – and the importance of just climate transitions. Photo by Carlos Figueroa/Wikimedia Commons

Chile withdrew as host of this year’s UN climate conference amid widespread unrest, but that doesn’t mean that fighting climate change should be pushed into second place behind addressing social inequality. On the contrary, the situation in Chile shows all countries that the social and climate crises cannot be treated separately. The simple fact that the popular uprising was triggered by a fare increase for one of the greenest metros in the world shines the spotlight on equity in access to sustainable mobility.

As countries gather for COP25 in Madrid starting this week, at a moment when protests against inequality and for climate justice are growing around the world, Chile’s experience can draw attention to the linkages between climate and social equity.

Chile faces major climate and social challenges: It is one of the 20 nations most vulnerable to climate change and the most unequal among OECD countries. Meanwhile, as a global leader on climate action, the country could plan its rapid transition toward a carbon-neutral and resilient economy in ways that help reduce social inequality. Current debates about the country’s transport, energy and water systems highlight how low-carbon and adaptive solutions could deliver greater and cheaper services for all – a strong demand from protesters. These solutions could also enhance the resilience of the urban poor, rural communities and Indigenous Peoples who suffer the most from the series of climate disasters that have hit the country. For Chilean social and environment activists, climate justice and social justice are clearly two sides of the same coin.

While the protests and calls for human rights and equity in Chile continue, here are opportunities in the transport, energy and water sectors that could help address climate and social challenges at the same time – not to mention inform discussions in many other countries.

1. Ensuring that everyone benefits from sustainable mobility can improve social inclusion.

Santiago’s public transport system is largely regarded as the best in Latin America and a world-class example of green mobility. But it also crystallizes challenges of social segregation, as shown in the central role of the metro in the social unrest.

The city’s metro, fleet of electric buses – the largest in the world after China – bike-share program, and bike lanes have been concentrated in central and wealthy districts. To address this inequality, the government has been investing billions to expand metro lines into underserved districts, such as San Bernardo, El Bosque and La Pintada, in which a large share of the population (22%, 27% and 42%, respectively) lives in poverty. The latest electric bus corridor also connects low-income districts.

However, the expansion of mass transit alone is not enough to ensure social inclusion. Since 2010, metro fares have increased by 40%, largely to finance new transport lines and efficiency gains. Santiago’s metro is now one of the most expensive in Latin America, which partly explains record fare evasion. Increased subsidies could help provide discounts for low-income commuters, who are disproportionally affected by the increase in fees during peak hours.

Zoning and other regulations could also lower the risk that the development of metro lines drives gentrification. In many newly connected districts, sharp increases in real-estate prices have priced out long-term residents. The quantity of low-income housing options has dropped by half. In addition, there is a need for more jobs and services in low-income neighborhoods so that residents don’t have to travel hours to wealthier districts in order to access employment opportunities.

2. A fast shift to renewables can reduce the cost of living.

Inefficiency in Chile’s energy system has also played an important role in the social unrest. The country’s dependency on imported fossil fuels for the majority of its energy supply explains why the fluctuation of foreign exchange rates and oil prices highly impact the cost of goods and services, such as the metro fare hike last month. One in three households suffer from energy poverty because they don’t have access to reliable or affordable energy services.

Transitioning to renewables is a very effective way for Chile to improve access to energy and transport. The country is poorly endowed with fossil fuels, but has vast renewable energy potential, thanks to its sun-drenched deserts, coastal winds, strong waves and active volcanoes. Following the adoption of the National Energy Policy 2050 in 2015, renewables’ share of electricity generation tripled up to 18% in four years, putting the country on track to meet its target of 60% clean energy generation (renewables and hydro) by 2035. Renewables are already starting to bring steady electricity, better services and jobs to remote communities and Indigenous Peoples. In response to the protests, and anticipating lower generation costs in the near future thanks to renewables, the government has also asked utilities to reverse recent increases in electricity prices.

While Chile stands out for its market-driven approach to the energy transition, the International Energy Agency (IEA) and others propose further regulations to deliver better energy services for all. These include ensuring the fulfillment of pledges for low electricity prices made by companies’ winning calls for electricity tenders; mandatory energy performance standards for products, equipment, vehicles and buildings; and greater targeting of energy efficiency programs toward households that struggle to pay energy bills.

Chile is the 18th most water-stressed country in the world. Since 2007, a “mega-drought,” the most severe in 60 years, has hit three-quarters of the country, including the Santiago region, home to 40% of the country’s population. Glacial reserves in the Andes mountains are also melting fast, and floods and landslides can cut off water for millions of people, as was the case in the Santiago region in 2016. In three decades, water availability has dropped by 40% in some regions.

This crisis is exacerbated by a deficient water system over which the government has very limited control. The Water Code adopted under the Pinochet regime in 1981 grants water rights to private companies in perpetuity, a system blamed for high levels of inefficiency and inequality. Chileans pay one of the highest water tariffs in Latin America, even as poor pipes cause the loss of 35% of urban drinking water; Overexploitation of surface and groundwater sources degrades watersheds, and, relatedly, 47% of rural homes, some one million people, lack access to drinking water. Conflicts between companies and rural and indigenous communities over water rights are on the rise.

About 74% of Chileans support returning water to public ownership to address the current situation, a shift strongly opposed by private utilities. The government recently proposed to the Senate a Water Code reform that could prioritize human consumption over commercial use and grant new oversight to the national water department. Experts also recommend ending companies’ perpetual water rights and speculation, upgrading irrigation systems, and expanding green infrastructure to ensure a fair distribution of water resources. Water rights will be a key issue for the upcoming revision of the country’s constitution.

Lessons for COP25 and Beyond

Current debates in Chile in the transport, energy and water sectors highlight the importance of just climate transitions and the ways in which well-designed climate policy shifts can reduce longstanding social inequalities. As public movements against inequality and in support of climate action take place around the world, COP25 is a key moment to spur countries to keep the imperative of equity in focus as they step up climate action.

Mathilde Bouyé is an Associate for the SDG Delivery Team and the Sustainable Finance Center at World Resources Institute.