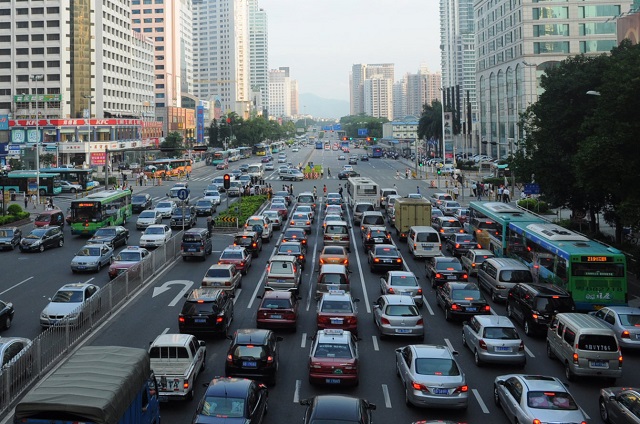 Shenzhen is one of many cities that have implemented policies incentivizing electric vehicles. Photo by tomislav domes/Flickr

As people stay home and city streets turn quiet, the COVID-19 pandemic has disrupted the global vehicle market. While many urban experts fear a turn to personal cars in lieu of public transport, few people so far are actually purchasing new vehicles. Sales of electric vehicles have been resilient in some places, while declining in others.

From January to March this year, vehicle sales in China decreased by 42% compared to the same time last year. Sales of new energy vehicles (NEV) – battery electric, hydrogen fuel cell or plug-in hybrid cars – decreased even more, by 56%. But in Europe, sales of electric cars have so far been more resilient than gasoline- and diesel powered vehicles.

The immediate future of the electric vehicles market is murky, but there are ample reasons for electric vehicles to be a priority during COVID-19 recovery efforts, including improving air quality and increasing employment.

Although China’s situation is unique, the country’s decade-long effort to encourage electric vehicles through policy can teach us much about what works and what does not. Before the pandemic, China’s NEV market experienced rocket growth for several years. From 2013 to 2018, China’s NEV stock grew from less than 10% of the global NEV stock to almost 45%. This was largely due to supportive policies from the national government, which greatly accelerated the improvement of technology and gradually matured the industry and market.

Here are three things we can learn from China’s NEV policies. 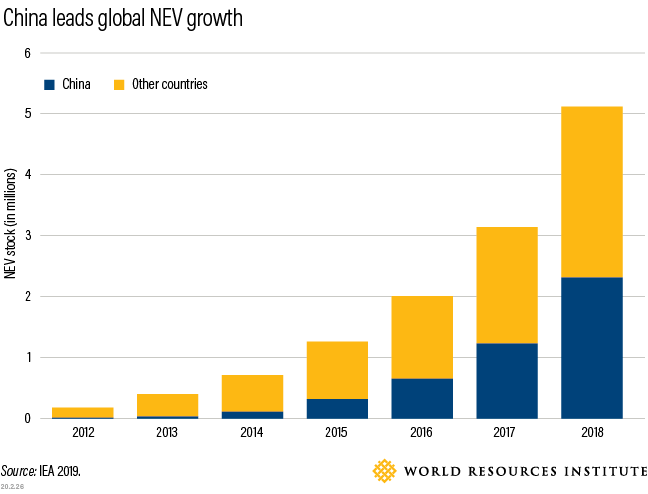 1. Provide Comprehensive Support, From Production to Purchasing to Vehicle Use

China has been adopting ambitious and comprehensive policies to promote the NEV industry and vehicle sales since the “Ten Cities, One Thousand Vehicles” program in 2009. The program set a target to adopt 1,000 NEVs, including buses, taxis and other urban service vehicles, in each of 10 cities over three years.

In 2010, NEVs were listed among China’s seven strategic emerging industries. In the years that followed, China established policies to guide almost all aspects of the industry, from research and development to production and product standards, and from purchase subsidies and tax discounts to transport measures that encourage NEV use. According to the China Automotive Technology and Research Center, more than half the growth of the NEV market can be attributed to purchase subsidies, with complementary transport policies and tax discounts also providing significant support to the market.

2. Evolve Policies Alongside Technologies and Markets

Based on lessons learned from the first run of the program, China’s national NEV policies started to focus more on improving technology, industry capacity, and encouraging innovative business and operational models. The government began emphasizing battery range, instead of focusing on electric power ratios, as one of the major eligibility thresholds for subsidies, for example. Nationwide subsidies haven been gradually reduced since 2014, especially for lower-range vehicles. For example, in 2018, no subsidies were provided for vehicles with a battery range below 150 km, while the subsidies available for vehicles with a battery range above 400 km totaled about 50,000 yuan ($7,180) per vehicle.

In 2017, China issued a new dual credit system that combines fuel efficiency standards and NEV mandates that require manufacturers to achieve fuel economy and NEV targets. It gives vehicle manufacturers credits based on the number of NEVs produced and the fuel economy of their internal combustion engine vehicles. If companies can’t meet certain targets with their own credits, they can trade with one another to avoid penalties.

In 2019, the government released an updated credit policy. The draft indicated plans to implement stricter standards for gaining credits in order to further reduce fuel consumption from vehicles and reduce the inertia of companies who can achieve positive credits more easily. Also, the adjusted terms in the updated policy draft leave room for more types of technologies, vehicle models and manufacturers to be included in the credit system.

Demand-side policies have also been a key factor in the growing NEV market.

Two of the most unique and effective demand-side policies are vehicle registration and road access privileges. Six cities and one province impose annual quotas on issuing new license plates, to reduce both traffic congestion and vehicle emissions. This means people have to win a lottery or bid to get a license plate before they purchase a new car. Among these, three cities – Shanghai, Guangzhou and Shenzhen – and the province of Hainan exempt NEVs from these vehicle purchase restrictions. Additionally, some cities like Xi’an waive license plate fees for NEVs. To further tackle congestion and pollution, cities are implementing road space rationing based on license numbers. This means that only certain license plates can drive on certain days, but NEVs are always exempt. So far, more than 20 Chinese cities have implemented such policies. Many municipalities are also considering giving road access priority to NEV logistics fleets.

In addition to vehicle purchasing and road access priority, reduced parking fees is another demand-side policy making headway in Chinese cities. By February 2019, at least 12 cities, including Shenzhen and Hefei, had reduced parking fees for NEVs. For instance, Shenzhen exempts daily first-hour street parking fees for NEVs. In Hefei, NEV users get five hours of free parking, twice per day, in parking lots owned by the local government, and they can have up to two hours of free street parking and half of the regular rate for any extra time.

China’s experience in promoting electric mobility is unique and can’t be exactly replicated. However, the country’s more than 10 years of aggressive electric vehicle policies can still provide valuable lessons to other countries who want to accelerate mobility electrification. As countries look for ways to recover from the unprecedented disruption of the COVID-19 pandemic, multi-faceted electric vehicle policy packages can help pave the way to a more robust industry and safer, more sustainable streets.

These policies can also serve China in its coronavirus recovery plans. In response to the crisis, China is extending its national NEV purchase subsidy for another two years, and the government identified charging infrastructure as a major priority in its New Infrastructure Plan. These measures should help continue to boost the development of a high-quality NEV industry in the years ahead.

Xiangyi Li is a Research Analyst at WRI Ross Center for Sustainable Cities.

Shiyong Qiu is a Research Analyst at WRI China.

Ge Shi is a former Research Intern at WRI China. He is currently a Graduate Assistant at University of Connecticut.