A World Resources Institute website
Energy + Climate Change
Hainan Bans All Fossil Fuel Vehicles. What Does it Mean for Clean Transport in China? 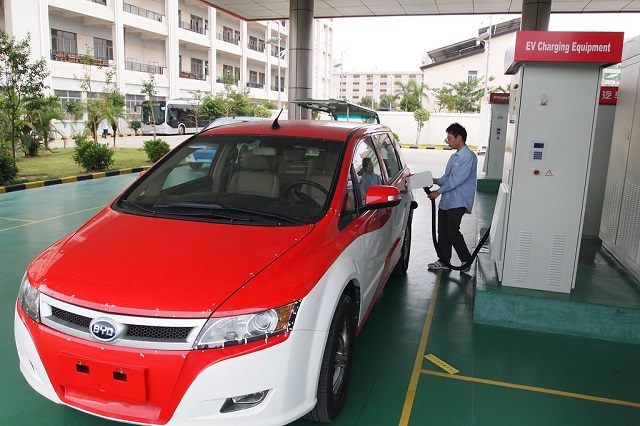 With a comprehensive charging infrastructure plan and electrification roadmap for each vehicle fleet, Hainan is leading an ambitious push toward clean mobility. Photo by Remko Tanis/Flickr

In March, China’s southern island province of Hainan became the first in the country to set a date by which all sales of internal combustion engine vehicles are to be ended. Hainan’s Clean Energy Vehicle Development Plan sets out a timeline for its fleets to be fossil fuel-free and fully transitioned to “new energy vehicles” (NEVs), a category that includes battery electric vehicles, plug-in hybrids and fuel-cell vehicles, by 2030.

With this plan, Hainan follows in the footsteps of a select few countries that have announced target years for banning new sales of internal combustion engine vehicles, like Norway (2025) and Sweden (2030), and begun moving rapidly toward electrification, key to reducing emissions and forging a low-carbon future.

Hainan’s plan is the kind of aggressive regional action needed to spearhead the country’s efforts and push it further in curbing carbon emissions and dependence on fossil fuels.

Here’s how the province plans to turn its clean transport goals into reality:

Establishing a clean electric grid is fundamental to Hainan’s plan. Most of the electricity in the province is currently sourced from coal. Renewable energy – specifically solar and wind power – constitutes 23% of generation, below the national average of 27%. Now, the province aims to capitalize on its promotion of NEVs as an opportunity to transition away from fossil fuels and diversify its energy mix. By 2030, Hainan aims to source 80% of its electric power from renewables and nuclear energy. 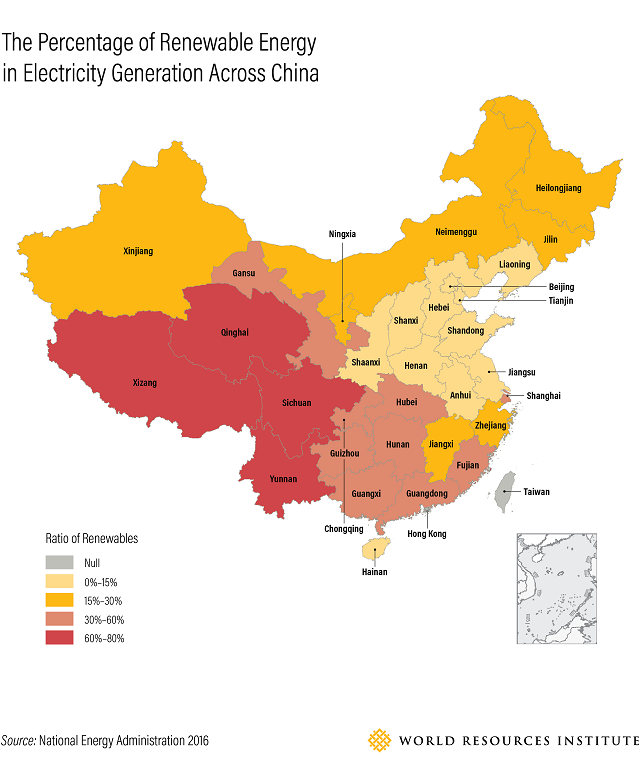 Although all newly purchased or replaced vehicles must be NEVs by 2030, Hainan’s pathway to get there is actually fairly conservative. For the next decade, the province will embrace a broader range of vehicle models called “clean energy vehicles” (CEVs), which include both NEVs and natural gas vehicles. Strong lobbying from local industry and cheap prices have pushed the province to allow certain fleets to first transition to natural gas – primarily vehicles like buses and inter-city coaches that have commercial CEV models readily available.

These fleets count for a small fraction of Hainan’s vehicle landscape, and when 2030 hits, all will be required to switch to electric. The province also plans to continue purchasing NEV buses alongside CEV models, incentivized by China’s national subsidies for cities or regions that procure a certain number of NEV buses. Still, the natural gas concession puts Hainan behind most other Chinese cities and provinces that are aiming for 100% electrification of buses now.

In Hainan’s roadmap, CEV and NEV targets for 2020, 2025 and 2030 have been tailored to each type of vehicle fleet. Private passenger cars will be given a more gradual transition period than most other vehicles, with 40% of new vehicles required to be NEVs by 2020, 80% by 2025 and 100% by 2030. Heavy-duty freight trucks – only a small fraction of the total vehicle stock in both Hainan and China – do not fall into the scope of the plan, since their electrification technology is not mature enough for commercial rollout. 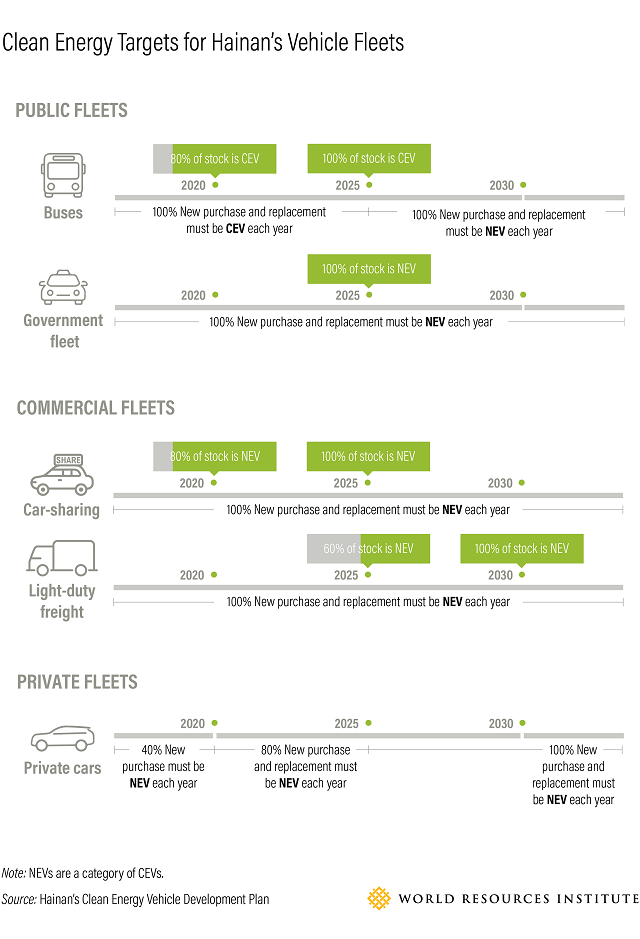 To meet its electrification targets, Hainan has developed a comprehensive charging infrastructure plan. The overall vehicle-to-charger ratio must be two to one by 2025. By 2030, the ratio for public chargers must reach six to one, and each private electric vehicle must have a home charger. Hainan plans to invest $290 million between 2019 and 2030 to increase grid capacity to reach these goals.

Hainan’s NEV plan comes amid China’s announcement that the government will phase out national subsidies on NEV purchases by 2021, moving toward more long-term, financially sustainable policies like the NEV credit system, tightened emissions standards and additional taxes on internal combustion engine vehicles. These changes will be significant. Subsidies have been essential to NEV development to date; for example, Shenzhen’s groundbreaking 100% electric bus fleet can be largely attributed to national and local subsidies that covered the purchase and operation phases.

Operational subsidies for buses will remain, but in the absence of purchase subsidies, Hainan is turning to local vehicle purchase and usage restrictions to incentivize NEV sales, primarily for private vehicles. The province is devising a plan to cap new vehicle growth each year through license plate auctions or lotteries like Beijing’s, requiring NEVs to account for an increasing share of the new vehicle quota until they account for 100% in 2030. Versions of this policy have proven successful in Shenzhen, Shanghai and Beijing for boosting NEV growth. Together, these three cities now account for 34% of China’s passenger NEV stock, according to the China Automotive Technology and Research Center’s statistics.

Hainan will also promote electric logistic fleets, mainly by allowing more light-duty NEVs like delivery vans into city centers. To contain air pollution and congestion, many Chinese cities have banned light-duty logistic vehicles from entering downtown areas during daytime hours. In Shenzhen’s case, lifting this ban for electric vehicles has helped the city’s freight operators rapidly electrify their fleets, with more than 61,000 electric logistic vehicles in operation by the end of 2018, surpassing the total number of electric buses and taxis in the city.

Lulu Xue is a Research Associate at WRI China.