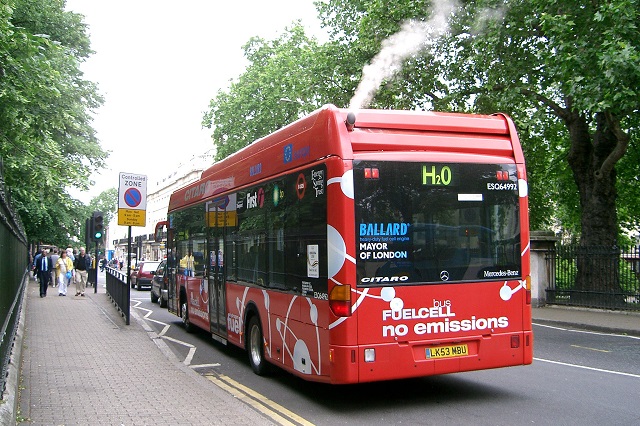 Both battery and fuel cell electric vehicles have roles to play in creating more sustainable and safer mobility, but neither makes sense in all cases. Photo by citytransportinfo/Flickr

Companies like Toyota, Nikola and H2X are doubling down on hydrogen fuel cell vehicles and positioning them as alternatives to their more popular zero-emission counterparts, battery electric vehicles. These companies and some advocates believe fuel cell vehicles could be key to decarbonizing the transport sector without sacrificing range or payload, thanks to fuel cell vehicles’ smaller batteries and lower weight.

But as alluring as hydrogen technology has become, it also has strident critics. Elon Musk mocked his competitor, Nikola, after they released their newest hydrogen truck by tweeting that the technology is “staggeringly dumb.”

Is Musk just protecting his business, or does he have a point? For cities seeking to reduce vehicular air pollution and climate emissions, a closer look reveals trade-offs – and potential use cases – for both battery electric and fuel cell technologies.

Why Ditch the Battery?

Like battery electric vehicles, fuel cell electric vehicles promise zero tailpipe emissions. They generate electricity by pumping hydrogen from a fuel tank into one side of the fuel cell stack as oxygen from the air enters the other side. Inside the fuel cell stack, the hydrogen breaks into protons and electrons that generate electricity then re-bond to expel water vapor through the tailpipe. The electricity from the fuel cell stack feeds into a battery that operates an electric motor.  According to the Hydrogen Analysis Resource Center, there are more than 20,000 active fuel cell vehicles worldwide; about 14% of those are buses, 6% are trucks and the remainder are light-duty passenger vehicles. In 2016, fuel cell vehicles comprised only 0.5% of total zero-emission vehicle sales, and most of these vehicles were operating in just a few countries (parts of Europe, the United States, China and Japan).

Fuel cell vehicles still have batteries, but they are much smaller and lighter than those in battery electric vehicles. In general, batteries are heavier than internal combustion engines and for some classes of vehicles the extra weight can be a problem. For example, the additional weight of 600-kWh battery in a battery electric truck could reduce cargo capacity by 3% compared to the same truck powered by a diesel engine. Because fuel cell vehicles store energy in the form of hydrogen, their batteries can be anywhere from 6 to 50 times smaller than a battery electric vehicle. The reduced battery weight can be particularly advantageous for vehicles that need a lot of power but also need to maximize their payload, like freight and aviation.

Fuel cell vehicles also have a fuel tank. Combined with the lighter battery, this energy system allows them to operate at longer ranges than battery electric vehicles because they store more energy at a lower density. Studies that focus on efficiency and well-to-wheel analyses find that fuel cell vehicles could be competitive at ranges over 400 kilometers.

Infrastructure is the costliest difference between fuel cell and battery electric vehicles because of the sheer number of stakeholders involved in the hydrogen fuel supply chain. There are efforts to grow the fuel cell vehicle market in several countries, but they depend on large government investments. Fueling infrastructure and hydrogen production costs comprise between 30-60% of total fuel cell vehicle deployment costs today. Stations generally cost between $1-2 million, depending on geography. Station capacity generally ranges from 200 to 600 kg/day, enough to fill between 6 and 20 buses. In comparison, electric charging stations in Philadelphia cost roughly $1 million all-in for a fleet of 25 battery electric buses.

A Closer Look at Sustainability

Depending on the emissions from charging and from hydrogen production, both fuel cell and battery electric vehicles emit fewer pollutants than their internal combustion engine alternatives and are the only technologies with the possibility of emitting no carbon dioxide. In the United States, the average battery electric vehicle emits 176 grams of CO2 per mile when charging from an average electricity grid. Fuel cell electric vehicles fueled by hydrogen from steam-methane reforming emit about 241 grams of CO2 per mile. Both technologies not only emit significantly less carbon than gasoline powered internal combustion engine vehicles, whose emissions hit 414 grams CO2 per mile, but they also emit fewer air pollutants like nitrogen oxides and particulate matter, which contribute to millions of premature deaths each year.

However, both fuel cell and battery electric vehicles also have the potential to emit more if we look at their life cycle emissions as opposed to their efficiency. Emissions from vehicles that use internal combustion engines have the highest lifetime emissions, ranging from 27-45 tons of CO2 equivalent, coming mainly from engine and tailpipe emissions. During their lifetime, battery electric vehicles can emit between 20-27 tons of CO2 equivalent, with a high amount of emissions from battery manufacturing. Finally, fuel cell vehicles can emit 22-35 tons of CO2 equivalent, with a high proportion coming from hydrogen storage, fuel cell components and the well-to-tank fuel cycle. Of all the vehicle technologies, fuel cell vehicles typically emit the most during the vehicle manufacturing process. (These ranges are all based on average mid-sized cars.)

What makes things tricky is that while life cycle emissions and total cost of ownership are key comparisons for understanding the long-term benefits of these technologies, life cycle emissions are hard to quantify and difficult to compare across geographies. For example, emissions from electricity production and emissions from hydrogen production vary significantly depending on the prevailing infrastructure. In some places where coal power plants provide the majority of energy to the grid, switching to battery electric vehicles may produce higher life cycle emissions than internal combustion engine vehicles. However, in most places, the grid is clean enough that battery electric vehicles can generate greater emissions reductions compared to business-as-usual scenarios and in some places, like South America where hydropower is more prominent, these reductions are even more impactful.

When Do the Benefits Outweigh the Costs?

While the research is still emerging, there is some evidence that hydrogen fuel cell vehicles could be useful for heavy-duty freight, transit between cities (via buses or trains), aviation and shipping. In the context of building a more sustainable and healthy transport sector, these long-range vehicle classes are important. However, they are what’s called “hard-to-abate” sectors – vehicles and use cases that are particularly hard to electrify. In all these cases the vehicles must store large amounts of energy without taking on much additional weight. These kinds of trips are also difficult to reduce or manage, unlike passenger vehicle trips, where a comprehensive approach to mobility can make it easier for people to get by without a private vehicle. Additionally, there is some evidence that fuel cell vehicles retain more of their range in cold weather environments. The lighter batteries and storage tanks of fuel cell vehicles have potential to be a better fit than battery electric vehicles in these situations.

Fuel cell vehicles, as the current technology stands, are less useful for shorter range trips and other vehicle classes, such as cars, two-wheelers or city buses, where battery electric vehicles tend to outshine them. Battery electric vehicles require less new infrastructure and can better support transport-oriented development policies that help reduce the need for car trips and, when travel cannot be avoided, shift users towards healthier and more sustainable options such as walking, biking and public transit. By placing charging infrastructure in areas where drivers can easily leave their car for periods of time and either walk or bike to their next destinations, battery electric vehicles can also contribute battery storage back to the grid, potentially bringing additional benefits to drivers and cities. Fuel cell vehicles that must refuel periodically like traditional cars do not have the same incentives to stay parked throughout the day. Nor can they serve as mobile energy storage assets during emergencies or help even out grid load to encourage renewable energy production and provide greater energy security in rural areas.

Both battery and fuel cell electric vehicles have roles to play in creating more sustainable and safer mobility. To ensure that zero-emission vehicles are being deployed effectively and without increasing overall vehicle usage, however, policymakers should examine how different technologies can serve different vehicle classes and apply their policy incentives with more precision.

Eleanor Jackson is a Research & Communications Assistant for the Global Electric Mobility team at WRI Ross Center for Sustainable Cities.