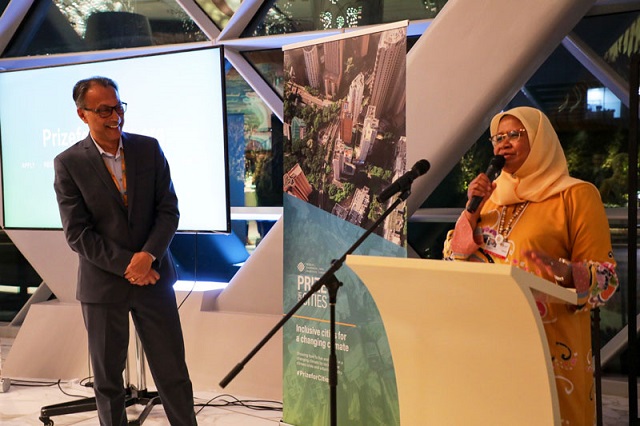 At the launch of the new cycle of the WRI Ross Center Prize for Cities, UN-Habitat Executive Director Maimunah Mohd Sharif emphasized the importance of finding and elevating transformative solutions to the twin challenges of urban inequality and climate change. Photo by Veronica Linares/WRI

“Acknowledgement, voice and the right to negotiate” – that’s what’s needed to bring the world’s urban poor back into the system and begin creating cities that work for everyone, said Sheela Patel, chair of Slum/Shack Dwellers International (SDI), at the 10th World Urban Forum in Abu Dhabi.

There are more than 880 million people living in informal settlements around the world, Patel said. “The future lies with informality. You are not going to stop informality, you are going to find solutions with informality. So how do you change the discourse on what’s good and bad? That’s as important in the climate space as it is in the social justice space.”

The sense of urgency was clear throughout the gathering of more than 13,000 urban changemakers from February 8-13, hosted by UN-Habitat. With the global urban population projected to rise by 2.5 billion by 2050 and the increasingly severe impacts of climate change already aggravating existing inequalities, there’s a growing understanding that big changes are needed in cities.

“In cities, the future lies with informality…So how do you change the discourse on what’s good and bad? That’s as important in the climate space as it is in the social justice space.”

A major focus of WRI’s involvement in this year’s WUF was emphasizing the need for cities to work directly with vulnerable communities.

In an op-ed published ahead of the conference, WRI Executive Vice President Manish Bapna joined Patel, who is also a commissioner for the Global Commission on Adaptation (GCA), to call on cities to take an inclusive approach to building resilience.

Patel is also a returning juror for the WRI Ross Center Prize for Cities, which this year has a new theme: “Inclusive Cities for a Changing Climate.”

WRI Ross Center Global Director Ani Dasgupta kicked off the 2020-2021 cycle at a launch event with Patel and UN-Habitat Executive Director Maimunah Mohd Sharif, who is a new jury member for the prize. Saul Billingsley of FIA Foundation also spoke in his role as an Advisory Council member.

“Achieving the Sustainable Development Goals and the 2030 Agenda means leaving no one and no place behind,” said Sharif. “City changemakers can make a world of difference. …We know they must be at the forefront of change to succeed in creating a more equitable and more sustainable world for everyone.”

Are you working on an urban project that has helped your city tackle #ClimateChange while reducing social inequality? If yes, apply for the #PrizeforCities, a $250,000 prize that celebrates transformative urban projects. Learn more ➡ https://t.co/6DJEO2tp80 pic.twitter.com/c6abm2VKu1

“With the Prize for Cities, we want to inspire a sense of possibility – that it is possible to slash greenhouse gas emissions while also acknowledging people’s day-to-day realities and leaving no one behind,” said Dasgupta. “We know it’s possible, but efforts are too few, and we need to learn faster from successes and scale them.”

Dasgupta also highlighted WRI’s work with UN-Habitat and a coalition of partners to mainstream climate resilience in city plans. He said adaptation measures too often zero in on infrastructure without working with affected communities to understand what is best for them.

“We have to look at the system of climate justice and take action that actually includes the poor from the beginning…it’s not just the idea that if you fix the city, the poor will just happen to get the benefit of it.”@AniDasguptaWRI on how to #AdaptOurWorld at #WUF10. pic.twitter.com/qVRReM6heG

WRI experts engaged on a host of other issues throughout the forum. WRI India Ross Center Director Madhav Pai led a session on electric mobility and spoke on re-inventing Delhi; Samrat Basak, director of WRI India’s urban water program, focused on cleaning up the Ganges River and cities-specific investment platforms, and joined his colleagues on the urban water team to present on a restoration action plan for a man-made lake in Hyderabad; and Vineet John participated in a discussion on how new mobility can drive sustainable development.

WRI also shared insights from the World Resources Report, Towards a More Equal City, at a session hosted by Director of Research Anjali Mahendra and Director of Knowledge Capture and Collaboration Robin King. Mahendra explained that prioritizing underserved populations for provision of core services like water, electricity and transport not only helps build their resilience but helps break the cycle of overconsumption and self-provision by wealthy residents and leads to more environmentally and economically sound cities overall.

At #WUF10, @amahendra22 highlights our #citiesforall work: “If you look at a city and you look at all the spatial inequalities that exist, one of the greatest ways you can achieve environmental and economic co-benefits is starting to provide access to underserved populations.” pic.twitter.com/nQ9PN5PV1s

But Rose Molokoane of SDI and the South African Federation of the Urban Poor said the pervasive divide between cities and their informal settlements prevents the collaboration needed to improve service delivery and echoed Patel on the need for cities to bridge this gap.

“How can I be illegal in my own city?”

Rose Molokoane of @sdinet and FEDUP on bridging the gap between the formal and informal city: ”This discussion will never end unless we scrap the word illegal or informal, because we are all belonging to the same city.” #WUF10 #CitiesForAll pic.twitter.com/8Z9XRW6l3n

There are successful examples of cities working with their informal communities. At an event by the Coalition for Urban Transitions on their flagship report, Climate Emergency, Urban Opportunity, Jack Makau, director of Slum Dwellers International Kenya (SDI Kenya), and Joseph Muturi, coordinator of the Kenyan federation of slum dwellers Muungano Wa Wanavijiji, spoke about their work in Nairobi to help households organize and work with the city to upgrade infrastructure and services, improving their resilience to climate impacts.

Residents in these communities have already built up strong capacity for resilience. “They told us how [climate change] affects them,” said Muturi. “We need as a climate community to leverage all this, so that we build on those capacities and that understanding that people have.”