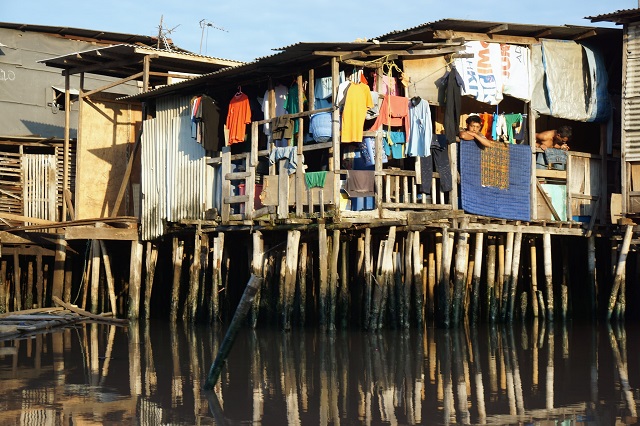 Cities must invest in greater climate resilience for their vulnerable neighborhoods, and involve residents in decisions. Photo by Budi Nusyirwan/Flickr

As thousands of urban leaders gather in Abu Dhabi for the World Urban Forum, the impacts of the climate crisis on cities have become more visible than ever. Severe floods tore through Jakarta last month. Heatwaves scorched cities from India to Europe last year. Together these disasters killed thousands of people and devastated many more.

Nowhere are these impacts more apparent than on the vulnerable and marginalized communities living in cities. For city leaders worldwide, improving the resilience of vulnerable communities must be a top priority this year.

We cannot wait. The climate crisis is here, now – and its impacts disproportionately affect people living in poverty. Meanwhile, more than 880 million people worldwide now live in informal settlements, which often lack even basic services like electricity and clean water. These communities are at greater risk of flooding, landslides and extreme heat.

There is a better way forward. City leaders must invest in measures that help vulnerable communities withstand climate impacts, from basic infrastructure to nature-based solutions. That means building or upgrading water mains, sewerage lines, electricity grids, roads and housing to be more resilient – without evicting or displacing communities.

But adapting to climate change is not simply a matter of building more things. Done right, adaptation requires a fundamental shift in how cities make decisions: People living in poverty and marginalized groups, who often have little or no political voice today, must be part of the decision-making process.

These are the people facing the harshest realities of climate change, and it should be they who decide how they adapt. The Global Commission on Adaptation recently called on city governments to do more to proactively engage marginalized groups in decisions that affect them, especially women and youth, while also ensuring they have the tools and knowledge to adapt to the changing climate. Otherwise, cities risk exacerbating existing inequities.

Including community groups is not only the right thing to do, but also the smart thing. A recent study from Slum/Shack Dwellers International showed that most development indicators fail to capture the complex and locally specific conditions of slums, leading to policies and programs that do not address their most urgent needs. Communities know the climate impacts they are most at risk of, and the solutions that will work best.

Cities are beginning to realize that involving communities is the right approach. Initiatives like the “Know Your City” program and Urban Community Resilience Assessments are enabling people in informal settlements to gather data on demographics, climate risks and access to basic services, and to prioritize upgrading investments. These efforts have led several cities, like Durban, South Africa, to collaborate with informal settlement residents on their climate resilience strategies.

In the city of Gorakhpur, India, a local civil society group worked with farmers on city outskirts to make their agricultural systems more resilient to climate impacts like flooding. These efforts doubled their income and raised the food security of people living in poverty.

These efforts are promising, but they are not happening at nearly the scale and urgency needed. That’s why a coalition of national governments, cities, urban planning networks and community organizations is working to create a more systemic shift. Led by UN Habitat and supported by the Global Commission on Adaptation, the effort – called the Building the Climate Resilience of the Urban Poor Initiative – is bringing marginalized communities into city planning processes and resilience plans.

This coalition recognizes a critical fact – that cities should not be expected to go it alone. National governments and international donors must step up their support for community-led climate action in cities.

By taking an inclusive approach to building resilience, city leaders will save lives. But the benefits go beyond that. Cities can tackle persistent problems like poverty, inequality and deficient infrastructure, enhancing people’s daily lives. They can improve their population’s health by cutting down the risks from infectious diseases and undernutrition, which are becoming more common with climate change.

2020 is being called a Super Year for climate action, and many cities are expected to put forth ambitious climate agendas. City leaders have a responsibility to ensure these agendas prioritize the needs and voices of the most vulnerable.

This article was originally posted on Thomson Reuters Foundation News ahead of World Urban Forum 10.

Sheela Patel is Chair of Slum/Shack Dwellers International and a Commissioner of the Global Commission on Adaptation.