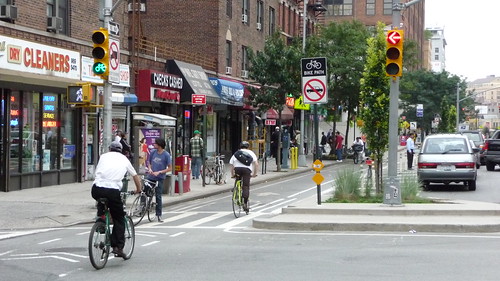 NYC cyclists cross an intersection of a separated cycle track in Lower Manhattan.  All photos by author, hosted on Flickr.

Many of the improvements in NYC’s bikeway system have been recent gains (check out the latest of these in a recent Streetsfilm video), achieved in no small part because of ardent, thorough, and sustained campaigning by NYC bicycling advocates, such as Transportation Alternatives. Riding around Manhattan and Brooklyn as a visitor a couple of weeks ago, I discovered much to be excited and thankful about. 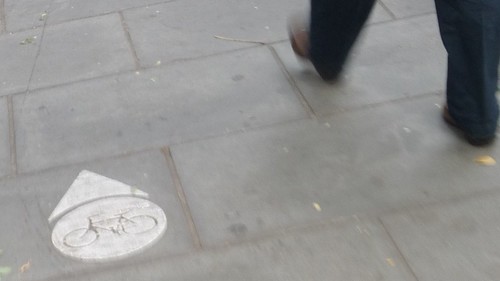 The marking above is a good first example of an innovative approach to bridging a bikeway gap. Technically, the path here is a Class 1 facility, being physically separated from the street. But its atypical in that it obviously exists primarily for pedestrians crossing through a large, busy park. It got me across Manhattan to the Brooklyn Bridge, though, in the most efficient manner possible, quickly and easily. Granted, I wasn’t able to speed my way through, but my route was clear and unquestionable throughout, and it was a pleasure to be part of a large pedestrian crowd — not ostracized for it. In L.A., I would likely have been shouted at by park staff to dismount my bike. (Check out this op-ed piece in the NY Times for an interesting take on bike-ped traffic over the Brooklyn bridge.) 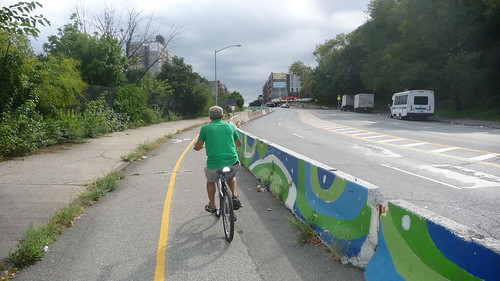 This second photo showcases another innovative technique to bridge a gap in the bicycle network. To the north of this location, the bike path heads toward and through Roberto Clemente State Park, which takes you beautifully alongside the East River. To the south is a bike lane that takes you through Harlem on down to Central Park. Lacking space, or possibly just resources, barriers have been erected here to carve out space from Franklin Delano Roosevelt Drive, just south of the George Washington Bridge. I imagine all that’s been lost is some street parking in a spot where it’s not very needed, but the treatment is quite effective.  Far easier, it would have been, to just label this segment “infeasible,” as we often do in L.A. 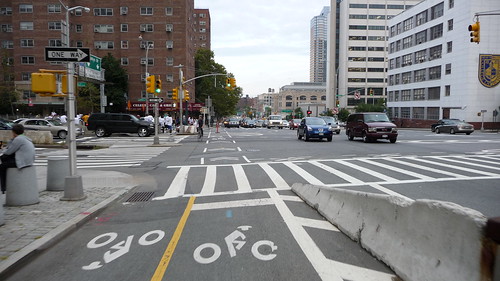 In this last photo, we’re back  to the Brooklyn Bridge route, but this time we’re at the Brooklyn entrance.  This short stretch of physically separated bike lanes helps get large numbers of bicyclists to bicycle routes directly to the east and west of the bridge path entrance. It seems a bit unorthodox, at first, but with the thousands of cyclists a day pouring through this segment, the treatment seems duly justified.