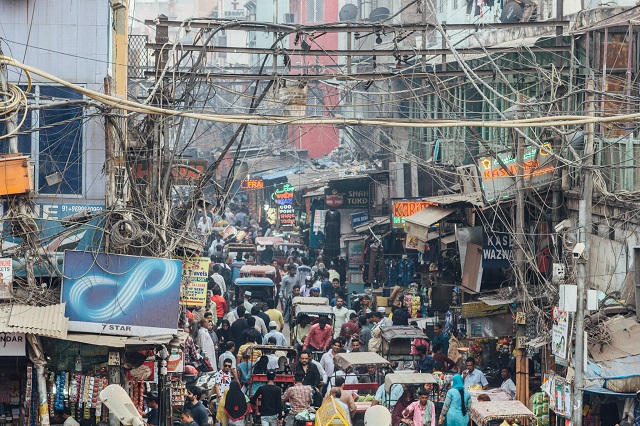 The last two decades have seen a rampant rise in environmental challenges being faced by cities and countries globally. In India, too, challenges related to air pollution, waste management, scarcity of water, conservation of natural resources, and loss of biodiversity, among others, have been increasing. This photo essay uses animations based on satellite images to show the effect these challenges have had on the country.

In the last two decades, India has urbanized at an unprecedented rate. This image shows the growth of Bangalore between 1990 and 2015.

While existing cities are growing, the country is also building new cities. This image shows the construction in progress between 2016 and 2019 in the new city of Amaravati, which would serve as the new capital for Andhra Pradesh. The city is expected to house 3.5 million people by 2050.

This fast growth has led to huge stress on natural resources, especially water. Some parts of the country are facing extreme drought. The city of Chennai is going through one of its worst ever droughts, and all the major lakes that supply water to the city are either completely dry or on the verge of drying out. This image shows the drying of Lake Puzhal (Red Hills Lake) between October 2018 and May 2019. The lake is a primary water source for the city.

The massive need for construction materials has led to the disappearance of many hills due to quarrying and other mining activities. This image shows the expansion of mining areas in the Aravalli Hills in Rajasthan between 1988 and 2018.

Despite advances in renewable energy, India is still largely dependent on thermal power plants to meet its increasing energy demand, resulting in a rise in coal mining rates. This image shows the mining activity between 1998 and 2018 in the Singrauli, one of the largest coal fields in India.

To accommodate India’s increasing population, vast areas that once had tree cover have experienced deforestation. This image shows the extent of deforestation in the Sonitpur district of Assam between 1988 and 2018. The forest lands covering thousands of square kilometers have been converted to agricultural lands and settlements.

The construction of roads and other human settlements inside forests and hilly terrains have resulted in slope failures, eventually leading to landslides especially during the monsoon season. In August 2018, regions along the Western Ghats experienced severe landslides. This image shows before and after images of the landslides that affected the Kodagu district of Karnataka in the aftermath of heavy rainfall.

Studies suggest that 90% of the fires in India are man-made. Either they are used for burning down forests or for stubble burning or crop fires. This image shows fire incidents across South Asia in 2018.

Rapid urbanization and solid waste management issues in the country have also led to fires in solid waste disposal sites across India. This satellite image from 2016 shows one of the worst fires in Deonar landfill site in Mumbai.

Urbanization, private transport, crop fires, burning of fossil fuels for electricity and other factors have caused an increase in air pollution across the country. This image shows the mean nitrogen dioxide (NO2) concentration in the air across India between July 2018 and May 2019. There is a higher concentration of NO2 in urban areas like Delhi, and in the eastern mineral belt where coal is mined and burnt for electricity generation.

DISCLAIMER: These maps are for illustrative purposes and do not imply the expression of any opinion on the part of WRI, concerning the legal status of any country or territory or concerning the delimitation of frontiers or boundaries.

This blog was originally published on WRI India.