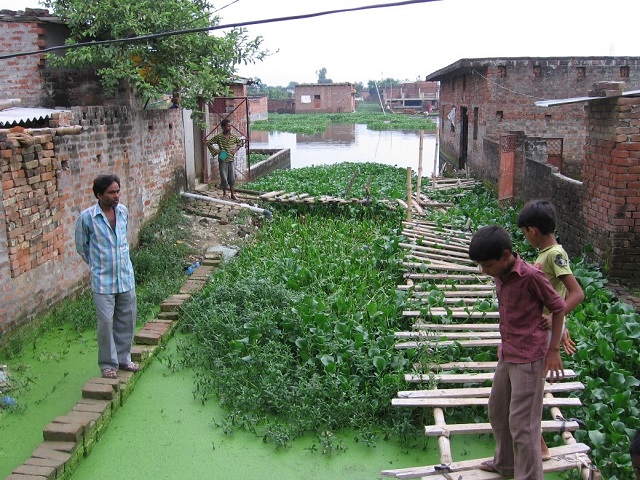 Monsoon season has always brought torrential downpours to Gorakhpur, India, but the city has seen record-breaking rainfall in the last few years. Residents of the northern Indian city often find their streets submerged in water, their houses waterlogged. Stagnant floodwaters have made Gorakhpur a hub for diseases such as dengue fever, malaria and Japanese encephalitis. More than 500 people died from these diseases between 2007 and 2010 alone.

Climate change is already altering precipitation and fueling floods in Gorakhpur, as it is in many cities. But the city’s vulnerability isn’t only related to warmer temperatures. As the city has grown, new buildings, streets and landfills have overtaken green spaces, farms and lakes ‒ areas that absorb rain and act as natural flood controls. The number of water bodies in Gorakhpur dropped from 103 in the 1970s to just 18 in 2012, thanks to haphazard urban development.

These problems are only poised to worsen as temperatures climb and Gorakhpur’s population grows. So as a new report from WRI and the Global Commission on Adaptation lays out, the city is experimenting with a low-tech and relatively low-cost solution to build resilience in vulnerable areas: natural infrastructure.

Unlocking the Potential for Transformative Climate Adaptation in Cities reveals the path to a more resilient and inclusive future for cities like Gorakhpur at the frontlines of climate impacts and urbanization. One of the key recommendations is integrating nature-based solutions to respond to flooding, heat and other growing risks. Other priorities include mainstreaming information on climate risks into spatial planning and delivery of urban services, and prioritizing action in vulnerable communities through partnerships with citizen-led groups.

Gorakhpur’s use of nature-based solutions for adaptation offers lessons for cities around the world.

GEAG partnered with farmers at the city’s periphery to implement climate-resilient farming tactics. The hope was that by improving agricultural productivity and livelihoods, farmers would not feel pressured to sell their land to urban developers, thus preserving open areas that act as one of the city’s greatest natural defenses against flooding.

Farmers switched from mono-cropping to rotating multiple crops in order to improve soil health and drainage. Several adopted organic practices, which reduced harmful run-off in nearby rivers and gave their produce a competitive edge at local markets. A weather advisory group helped farmers use a text message-based early warning system to schedule irrigation and harvesting. Overall, these efforts boosted crop yields and grew farmers’ incomes by one-third. The project not only preserved existing farmland, but expanded the amount of land under cultivation. All of this green space provides the city with better flood control and helps recharge underground aquifers.

In another pilot project, GEAG worked with slums near the city center to protect water bodies and drainage channels. Clogged drainage channels are a major cause of street flooding and stagnant water. Neighborhoods organized household waste and recycling collection to keep drainage channels clear. While the efforts helped these neighborhoods become more resilient to flooding, they were not a replacement for the basic infrastructure and public services many slums lack.

While these nature-based solutions led to incremental improvements, GEAG soon realized that its efforts were being hamstrung by larger city governance problems. Local city authorities lacked the agency and financial means to make decisions over basic services like waste collection, water, sanitation and drainage. Land use plans were seldom enforced, resulting in unmanaged expansion into green spaces and other areas important for flood control.

So GEAG worked with city officials and regional agencies to put in place regulations and incentives to manage Gorakhpur’s expansion. For example, the city improved its transparency and data collection on land ownership. The city now uses this information to more effectively enforce “no development” zones ‒ especially on farms and open spaces important for flood control. Creating governance mechanisms to gather and use local data in an inclusive way is one step toward transformative adaptation.

Gorakhpur is just one of many fast-growing cities across the world where climate change poses an imminent and growing threat. Research shows that flooding, storm surge and sea level rise could affect more than 800 million people, costing cities $1 trillion annually by mid-century. In land-locked cities, warmer temperatures are expected to increase the amount and intensity of rainfall. Fast-growing cities in the global south, home to more than 880 million people who live in slums, are typically the most under-resourced to deal with these growing risks. 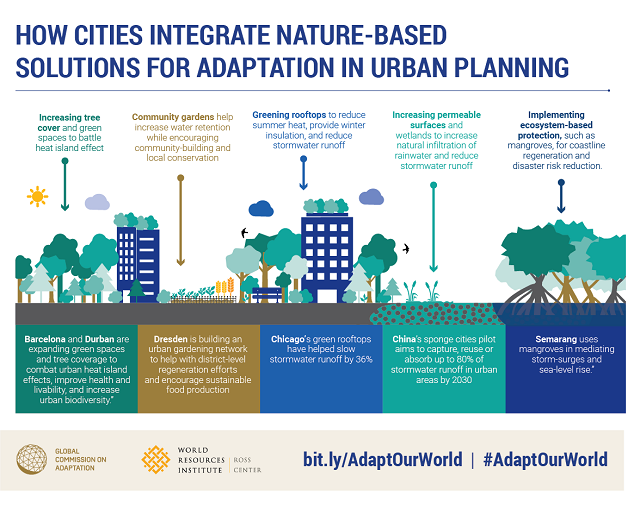 To scale the type of action happening in Gorakhpur, cities, regional authorities and national governments must strengthen all urban areas’ adaptive capacities through deeper understanding, better planning and effective finance. From restoring mangroves to mitigate storm surge to planting trees to lower cities’ temperatures, nature-based adaptation solutions can have a transformative effect. It’s time for all cities to evaluate how natural resources can protect their communities from growing climate risks and create a better quality-of-life for all, while preserving urban and regional ecosystems.

The Global Commission on Adaptation’s Year of Action for Cities

The Global Commission for Adaptation calls for all cities to put in place inclusive policies, projects and structures that will deliver climate-resilient cities by 2030. As part of its Resilient Cities Action Track, the Commission will work with partners to mobilize political, technical and financial support for more resilient and equitable cities. Specific initiatives include building the climate resilience of the urban poor, supporting a network of cities to develop and implement more resilient urban water systems, escalating the implementation of nature-based solutions in cities, and expanding national and international investment in climate-resilient cities.

Jillian Du is a Research Analyst at WRI Ross Center for Sustainable Cities.