A World Resources Institute website
Integrated Transport
Everything You Need to Know About the Fastest-Growing Source of Global Emissions: Transport 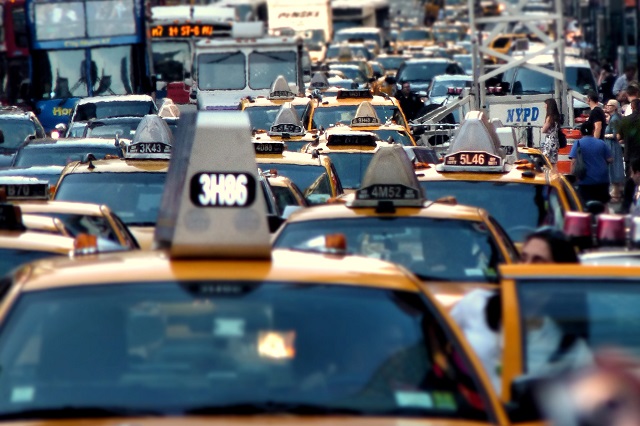 Road emissions are the biggest subset of transport emissions. Photo by b k/Flickr

People and goods are on the move faster and farther than ever.

All that movement comes at a cost – not just the sticker price of a new car, train ticket or shipping bill, but also an environmental cost. Transport, in fact, eats up a significant portion of our carbon budget.

Transport emissions – which primarily involve road, rail, air and marine transportation – account for over 24% of global CO2 emissions in 2016. They’re also expected to grow at a faster rate than that from any other sector, posing a major challenge to efforts to reduce emissions in line with the Paris Agreement and other global goals.

Decarbonization of the transport sector would create a cleaner, healthier and more affordable future for everyone. And it can be done without sacrificing the interconnectedness we’ve come to expect from modernity.

But what exactly are transport emissions? How are countries already addressing them, and where are the further opportunities for decarbonization? To better understand those questions, we used Climate Watch to take a closer look at the data.

1. How big a problem are emissions from transport?

Emissions from the transport sector are a major contributor to climate change – about 14% of annual emissions (including non-CO2 gases) and around a quarter of CO2 emissions from burning fossil fuels.

Even more concerning: At a time when global emissions need to be going down, transport emissions are on the rise, with improvements in vehicle efficiency more than offset by greater overall volume of travel.

Take the United States as an example. After experiencing a decline in transport-related emissions from their peak in 2005, emissions plateaued and have now risen every year since 2012. In 2016, the transport sector surpassed the electric power industry as the single greatest U.S. emitter of GHGs for the first time.

2. Where do transport emissions come from?

In terms of transport modes, 72% of global transport emissions come from road vehicles, which accounted for 80% of the rise in emissions from 1970-2010. 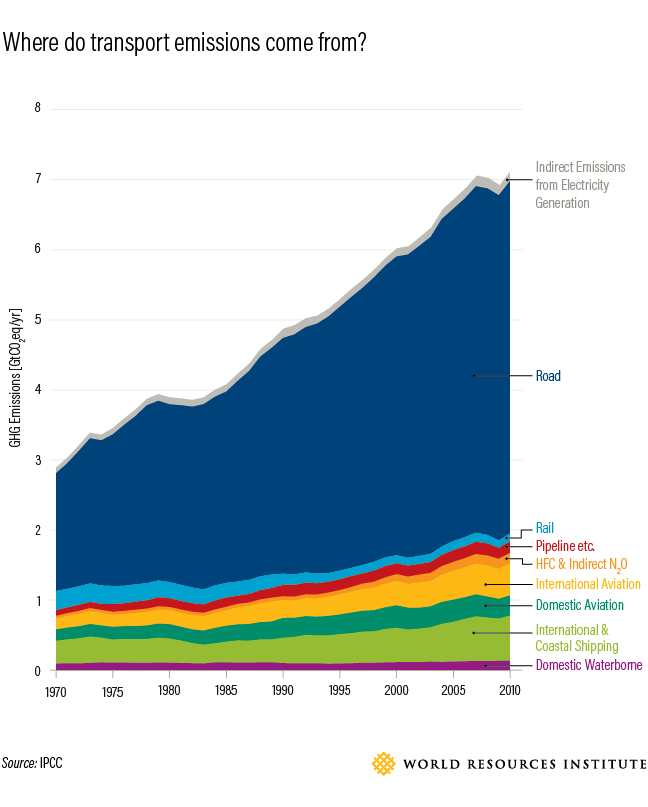 3. Which countries are responsible for the most transport emissions?

In terms of geography, transport emissions mostly come from upper-middle-income and high-income countries. By comparison, South Asia and Sub-Saharan Africa contribute less than other regions.

The 10 countries with the largest transportation emissions in 2014 were (in descending order): United States, China, Russia, India, Brazil, Japan, Canada, Germany, Mexico and Iran. Together these countries contributed 53% of global transport emissions in 2014.

4. What energy sources does transport rely on? 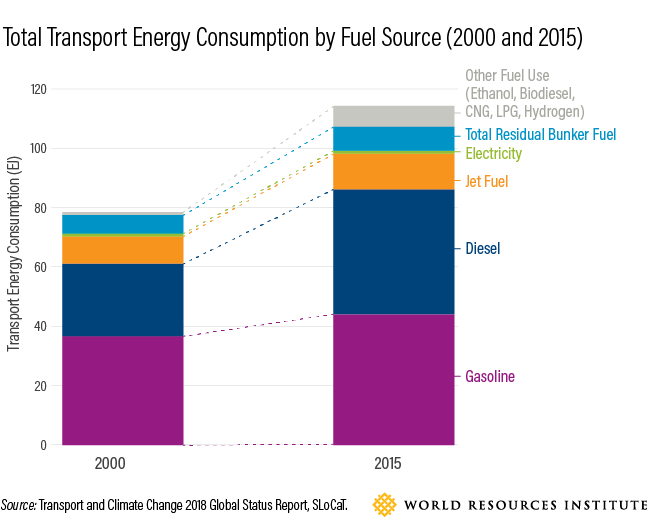 Energy use in the transport sector will likely continue to increase in both developed and developing countries. Most energy scenarios – including those that take into account existing national commitments under the Paris Agreement – show transport-related energy consumption continuing to increase, and oil continuing to comprise the largest share, through 2050. Transport’s reliance on fossil fuels needs to shift dramatically in order to be consistent with a trajectory of limiting global temperature increase below 2 degrees Celsius.

5. How can we reduce emissions from transport?

To keep temperature rise within a range that averts the worst climate impacts, IEA modeling suggests that transportation emissions need to peak around 2020. Transitioning to zero-emission transport is a crucial step toward a livable future. Getting there requires a comprehensive suite of improvements, addressing clean fuels, vehicle efficiency, how we build cities, and how we move people and goods.

Electrification is an important part of the solution to the challenge of growing transportation sector emissions because it eliminates tailpipe emissions and harnesses the potential to decarbonize the power grid. For example, the EPA reported that alternative fuel vehicles are “beginning to have a measurable and meaningful impact on overall new vehicle fuel economy and CO2 emissions,” increasing 2016 overall fuel economy by 0.1 mpg despite representing just 1% of new vehicle production in United States. Electricity’s share in transport energy consumption is projected to increase sevenfold from its 2011 level by 2050. However, the emissions from electricity generation and transmission should also be taken into account to decide whether electrification makes sense in a given location.

More stringent fuel efficiency standards, not only for passenger cars but also heavy-duty vehicles (HDVs) such as buses and trucks are also crucial for cutting transport emissions. Freight transport consumes around 40 percent of the energy used in transportation sector. Private companies have also been taking initiatives such as the production and prototyping of zero-emission trucks and committing to carbon neutrality by mid-century.

Public transport can transport people much more efficiently than private vehicles. The focus on public transport has also been integrated with electrification, extending transport networks and other urban transport services. For instance, electric buses are gaining ground in China and Chile.

New mobility could promote the use of shared cars and bicycles while also integrating advances in electric, autonomous and data-driven technologies. If cities embrace automation, electrification, and ride sharing, research says they could cut transport emissions a drastic 80%. In consideration of equity, accessibility and sustainability, new mobility can have a greater effect on both behavioral change and policy regulation.

Currently, around 1 out of 5 of the national climate plans (NDCs) submitted as part of the Paris process include quantified mitigation targets for transport. A small handful of those include targets for public transport and EVs. Countries should specify transport sector targets and plans addressing those opportunities, not only in their NDCs but also in their Long-Term Strategies. Of the 13 Long-Term Strategies already submitted, 12 include transport sector strategies; 11 include strategies for electrification, ten for public transport and nine for new mobility.

While transport emissions account for over 15% of global emissions and are expected to grow at a fast rate, there are still a lot of opportunities to make transport cleaner. Countries should further specify clear pathways and mobilize both public and private sectors to decarbonizing transport, soon, if they are going to avoid these dangers and seize the opportunities provided by 21st-century means of getting around.

This post is part of a sector-by-sector breakdown using Climate Watch of where emissions come from. Also published so far: Agriculture.

Mengpin Ge is an Associate for the Climate Program at World Resources Institute.