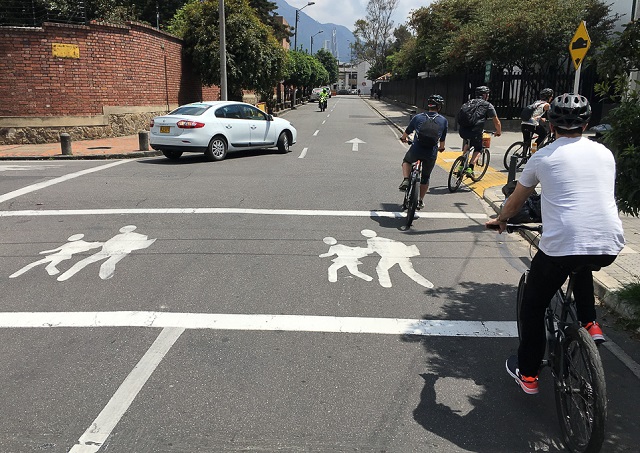 Bogotá will soon have a new mayor, but new data suggests one of the current administration’s major policy priorities – making the streets safer for pedestrians and drivers – should be continued.

Bogotá’s Vision Zero Road Safety Plan, launched in December 2017, is showing impressive early results. The number of deaths reported for the first seven months of 2019 is the lowest in a decade. Deaths have dropped 11% compared the same period in 2018 and 2019, and 12% compared to the average number of fatalities between 2014 and 2018. The largest reductions have been in motorcyclist deaths (28%) and pedestrians (17%), from 2018 to 2019. Pedestrian deaths have declined every year since 2015.

The overall reduction in road deaths is a remarkable achievement that should be maintained and reinforced. The main element in the Vision Zero plan implemented by Mobility Secretary Juan Pablo Bocarejo is a speed management program. (Full disclosure: the program was supported by WRI Ross Center and its partners in the Bloomberg Initiative for Global Road Safety.)

Bogotá’s speed management program is not just about reducing speed limits; it is a holistic approach involving engineering, education and enforcement. The most impactful and visible measure was limiting speeds to 50 kilometers per hour (29 miles per hour) on eight key arterial roads. Two additional corridors will get 50 km/h speed limits in the next two months. Corridors where the speed limit has been applied and enforced have seen a 27% reduction in traffic fatalities – 16 pedestrians, 9 motorcyclists and 4 bicyclists less than the average number of fatalities of the previous three years.

Limiting speeds to 50 km/h on arterial roads has been proven to achieve road safety outcomes, while not increasing congestion or travel time for most drivers. Traffic signal timing and traffic are the biggest determiners of travel time. Even at night, when drivers can achieve higher speeds, travel time lost from lower speed limits is not meaningful, at less than two minutes for a 10 km trip.

The speed management program also introduced low speed zones in residential neighborhoods, around schools and in commercial areas. More than 2,000 school zones and other local streets have new infrastructure and signs with maximum speeds of 30 km/h. Other design changes, like fewer lanes, smaller turning radii, speed bumps and measures that force drivers to go at moderate speeds, make these streets “safer by design.”

The improvements in Bogotá are notable and deserve continued support in the next administration. But much remains to be done. Nearly 300 deaths every year is still a very high number. Indeed, a core principle of the Vision Zero approach is that all traffic fatalities are preventable. The aeronautic industry and government regulators do everything they can to prevent plane crashes, using detailed evidence gathered from thoughtful investigation after each incident to make policy changes. Why is even greater carnage on our roads not considered a tragedy? As in air travel, we need to work together to reduce the number of fatalities to zero.

There is still need to improve the quality and proper usage of motorcycle helmets; increase the use of seatbelts, particularly in rear seats; and keep up controls on drinking and driving. Industry standards for safer vehicle designs – both cars and motorcycles – can also make a difference. Cycling infrastructure and interactions with traffic need special attention as well. The number of bicyclist deaths has actually increased 13% in the last year, as the number of users keeps growing.

Automated speed cameras could help change the behavior of the 21% of car and motorcycle drivers who exceed speed limits in the city. A meta-analysis on the effectiveness of speed cameras that summarizes 15 studies in Australia, Belgium, the United Kingdom, Norway, Sweden, Spain, the United States and New Zealand showed a 20% reduction in the number of crashes. Speed enforcement in São Paulo using electronic devices helped reduce the number of traffic deaths from 2,049 to 1,558 in just one year (24% decline).

From speed limits to new infrastructure, the evidence shows a sustained reduction in traffic fatalities through a comprehensive Vision Zero road safety plan is one of the most valuable legacies of the current administration – a legacy that should be maintained and reinforced by whoever next leads the city.