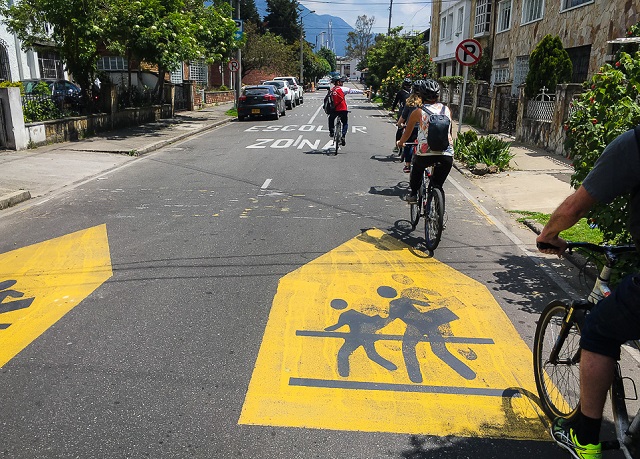 Smarter streets and clear road signage in Bogotá, Colombia, aim to enhance safety and access for pedestrians and cyclists. Photo by Dylan Passmore/Flickr

Despite more than 1.35 million lives lost on the roads each year, traffic-related fatalities aren’t given the same media or political attention as plane, train or boat disasters. Indeed, some view these tragedies as commonplace or unavoidable – but they don’t have to be.

A road designed using the “safe system” approach puts human life – and its inherent vulnerability – at the center. It recognizes that the human body can only take so much force and that even the most conscientious person can make a mistake, but this should not cost them their life. This perspective is particularly important when considering the safety needs of people walking, biking or motorcycling, who do not have the added protection of a vehicle and who together account for over 50 percent of all road traffic deaths.

“Sustainable and Safe,” a report by WRI Ross Center for Sustainable Cities and the World Bank released earlier this year, provides guidance on how to create a safe mobility system for all types of road users. When applied in an integrated way, eight key actions can lower risk by reducing travel frequency and distance and providing a greater variety of safe and healthy mobility options. 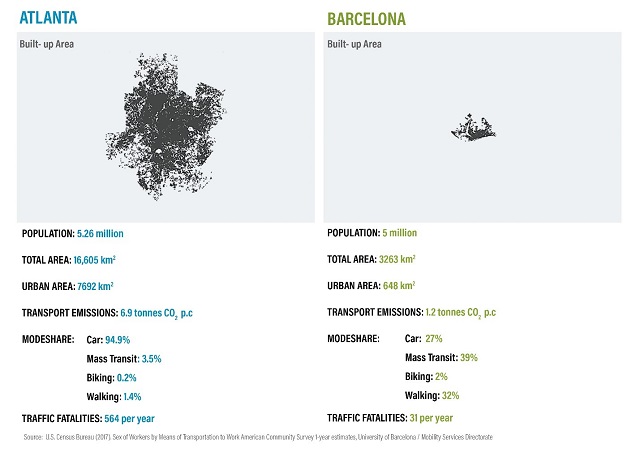 Why? For every 1 percent change toward a more compact and connected urban form, all-mode traffic fatality rates fall by 1.5 percent, and pedestrian fatality rates decrease by 1.5-3.6 percent.

Barcelona and Atlanta provide a striking comparison. Both have similarly sized populations but very different densities and dominant transport modes. The majority of Atlanta’s residents drive private cars, whereas Barcelona residents primarily take mass transit and walk. In part as a result, Atlanta has 18 times more traffic fatalities on average every year.

Street design can enhance safety and quality of life by improving visibility and accessibility for people walking and cycling and encourage safer behavior from drivers.

For example, traffic circles are effective at reducing traffic speeds at intersections, hot spots for collisions. Speed humps can control vehicle speeds near residential and school zones. And narrower streets encourage more careful driving and make it easier for pedestrians to cross. Evidence from Mexico City shows that for every additional meter of width in a crossing, the frequency of pedestrian crashes increases by up to 6 percent.

Evidence shows that high-quality public transit is safer than traveling by car. In high-income countries, the traffic casualty rate for public transport is 10 percent of that for automobile travel. People who live in transit-oriented communities have about 20 percent the crash casualty rate as people who live in automobile-oriented communities. High-quality bus rapid transit can reduce fatal crashes on urban roads by half.

Multiple transportation options should be integrated into cities for the greatest impact. Policies that provide economic incentives to reduce private motorized vehicle use, such as congestion charging and parking policies, also provide health and environmental benefits and can improve access to vital services, like jobs and education.

Matching vehicle travel speeds with the types of usage and travel modes expected for a given street is a core component of a safe system. People walking and biking should not be exposed to potentially fatal vehicle speeds. Appropriate speed limits and other interventions that control speeds and separate people from traffic have a minimal effect on average travel times (travel times are impacted more by other factors like frequency of intersections). However, speed controls have a significant impact on the likelihood and severity of a crash. Studies have shown that for every 1 percent increase in speed there is a 4 percent increase in fatal crashes.

Improvements in traffic law enforcement can lead to rapid reductions in deaths and injuries. Requiring drivers to obey the speed limit, yield to pedestrians and cyclists, wear seatbelts, avoid drunk driving, and use child restraints can have a powerful impact on changing road user behavior. In New South Wales, Australia, a higher penalty for speeding offences by novice drivers resulted in a 30 percent reduction in the number of fatal crashes involving those drivers. From 2008 to 2012, seatbelts saved an estimated 63,000 lives in the United States, enough to fill 79 Airbus A380s.

Getting safe, competent and well-trained drivers on the road is part of the battle. Education programs for new drivers should be thorough, highly supervised, regulated, hands-on and start early. Such programs, which have scattered coverage in many places, should be introduced in schools to help adolescents build their competencies as early as possible.

But it’s not just new drivers that can benefit from education about safe driving. Informing key stakeholders such as planners, engineers, health professionals and law enforcement officers of the various principles and action areas of the safe system approach aids in the smooth operation and development of the system. Community groups and NGOs can also be allies through advocacy and awareness campaigns, temporary street design changes, and speed limit trials. These measures have proven to reduce crashes by 10 percent. In fact, mass media campaigns have a much more significant effect on behavior when coupled with enforcement and educational activities. 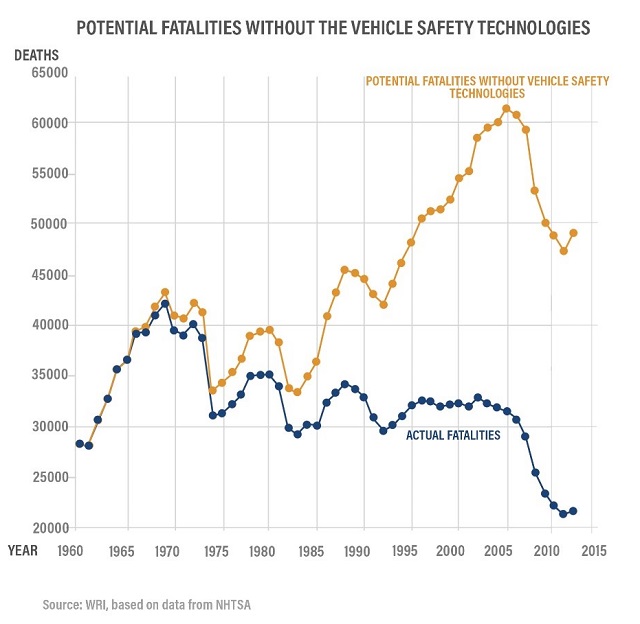 Due to ground-breaking advances in car design and technology, high-quality modern vehicles can perform much better in case of a collision than those of the past. In fact, they are much better equipped to avoid collisions altogether, but many countries do not require car safety technology in new models.

If minimum vehicle safety standards for seatbelts, car seat anchorages and frontal/side crash protection were applied in Argentina, Brazil, Chile and Mexico – four of the largest countries where such standards are minimal – an estimated 40,000 car occupant fatalities and 400,000 serious injuries could be prevented between 2016 and 2030.

8. Speed Up Emergency Response and Care

Fast, effective emergency response is key to reducing the impact of traffic collisions. But systems differ from place to place. Often, delayed responses to fatal crashes are due to uncoordinated communication between responder systems and slow deployment of resources.

The best way to provide prompt medical treatment is through a national or regional trauma system, which includes hospital-based mobile medical teams that are trained to work efficiently with ambulance services, local police and fire services. More traffic deaths occur outside of hospitals in low- and middle- income countries than in high-income countries, in part due to less effective emergency response.

Each step of the safe system approach may seem simple, but surprisingly few places check each of these boxes. According to a World Health Organization report, without urgent action, road traffic fatalities will continue to rise resulting in 2.4 million fatalities each year by 2030. With fewer able-bodied workers, countries that do not invest in road safety could miss out on anywhere between 7 and 22 percent in potential GDP per capita growth over a 24-year period, according to a study by the World Bank.

It’s important for everyone to understand that the status quo of increasing road deaths is not inevitable. We can do better, we can be safer.

Nikita Luke is a Project Associate for Health and Road Safety at WRI Ross Center for Sustainable Cities.