A World Resources Institute website
Climate Resilience
Transforming Transportation 2020 Day 2: Can Mobility Be a Bridge to the New Economy? 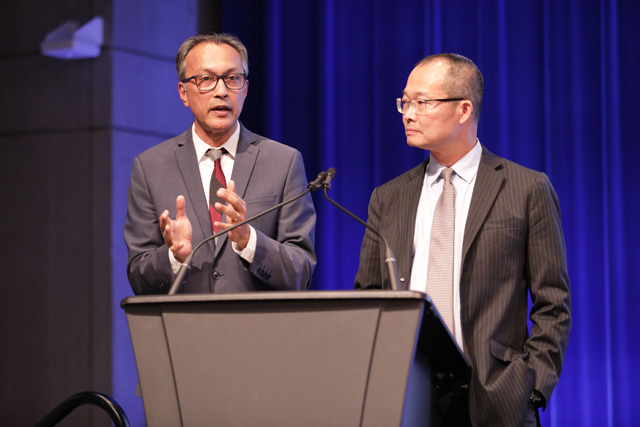 “All the things we want to do [in transport] are good for the climate. The question is how do we get there? How can transport be the champion?” said Ani Dasgupta, global director of WRI Ross Center, on the final day of Transforming Transportation 2020. Sustainable transport as the bridge to a new, greener, more equitable economy was the central provocation of this year’s event, held against the backdrop of an escalating global climate crisis.

The need for change is clear, said Andrew Steer, president and CEO of WRI, who challenged the audience of more than 1,200 policymakers, business leaders, development practitioners, experts and advocates. Transport must become cleaner, safer, reach more people and be more productive.

More than three-quarters of urban dwellers lack reliable access to at least one core service, like water or electricity. Over a million people die in road crashes every year, mostly in developing countries. Air pollution, much of it from automobiles, causes even more deaths. And traffic congestion costs hundreds of billions in productivity.

At #TTDC20, @AndrewSteerWRI outlines the road to decarbonization:

The transport sector can be the link between climate ambitions and economic, health and equity goals, said Guangzhe Chen, global director for the Transport Practice at the World Bank. But today’s approach to building infrastructure and designing transport systems and policies has to be different than in the past.

Maruxa Cardama, secretary general of the Partnership on Sustainable, Low Carbon Transport, said we need “a revolution” in financing schemes.

.@SLoCaTOfficial’s @MaruxaCardama tells the audience why she’s motivated to transform the #transport system: the need for a revolution. https://t.co/edaUbniXVM #TTDC20 pic.twitter.com/8POVZZ67Ls

In a lively debate about climate change mitigation and the role of technology, the one thing panelists could agree on is that innovation is required both in technology and behavior change. Progress in only one sphere or the other will be insufficient.

.@DLR_en’s Barbara Lenz says that technology plays a crucial role in emissions mitigation. But the solutions must go further than that. Tune in live: https://t.co/2OsWQACVQ9 #TTDC20 pic.twitter.com/jsvfgMFO8d

“We cannot just electrify the problem,” said François Bausch, deputy prime minister of Luxembourg. He said that what’s required is nothing short of a complete systems change.

Paving the way to a #resilient future isn’t solely about building infrastructure. It also means investing in people. More from Galumalemana Taátialeoitiiti A. Tutuvanu-Schwalger on her experience in Samoa at #TTDC20: https://t.co/B6GfbYfJV3 pic.twitter.com/8P5IpxvPPw

Oscar de Buen Richkarday, former president of the World Road Association, agreed, saying resilience is not only about minimizing the effect of storms but lowering their cost. That means training road managers to think about choices between preventative vs. corrective measures.

At #TTDC20, @PIARC_Roads’s Oscar de Buen Richkarday highlights the need to change the culture of road authorities, so they can prevent instead of correct. Tune in: https://t.co/YyyeAmB59P pic.twitter.com/bbpTHT1IlV

The mayor of Freetown, Sierra Leone, Yvonne Aki-Sawyerr addressed the audience by video conference and outlined the major changes in climate that are now challenging the city. Over the last decade, flooding has become a consistent problem, exacerbated by deforestation. One landslide in 2017 killed more than 1,100 people. Regular flooding also disrupts mobility on the city’s already crowded streets. Aki-Sawyerr said the city is working on immediate adaptations, like better drainage, but also introducing systematic changes, like a cable car to link neighborhoods without using more road space.

Indonesia’s capital, Jakarta, is another city facing recurring flooding and has had to make systematic changes to planning, said Amin Subekti, head of the governor’s delivery unit for the capital.

Amin Subekti of Jakarta: 80% of commuters are using private transportation today. We want to change this. Need more and more people living within walking distance of stations, to provide incentives and disincentives for compact, connected growth. https://t.co/8hTurWAwGW #TTDC20 pic.twitter.com/HGJRtjP2hR

Many panelists agreed that gender differences need to be better incorporated into transport planning. The World Bank’s Arianna Legovini presented research from Rio de Janeiro on sex-segregated metro and train cars showing about 50% of women reported being physically harassed in public.

Love to see this gender ratio! 5👩🏽‍💼 and 1👨🏽‍💼 on “Bold mobility reforms to improve social and economic impact”

Of course womxn are leading the way on boldness 👏👏👏 #TTDC20 pic.twitter.com/UG4Ik2GtYD

“We are always talking about what to do — we need to talk more about how to do it,” said Måns Lönnroth of the Volvo Research and Educational Foundations, who keynoted a panel on how to create bold reforms. “Politics makes all the difference,” he said, comparing cities where reforms have failed and where they have been successful.

“Bold reforms of metropolitan and public transport build alliances around IDEAS that unite interests of urban and suburban lower AND middle classes. That’s the only way to create,” says Måns Lönnroth at #TTDC20. Tune in LIVE: https://t.co/9FyQmeRSpO @VolvoGroup pic.twitter.com/AWfh0Lx2If

Reforms might be unpopular, said Maria Vassilakou, former deputy mayor of Vienna, who said she was once the “most hated woman in Vienna.” But transformation is possible. Today, Vienna is ranked among the best cities in the world for public transport and livability.

To catalyze change in the #transport system, you will experience controversy. But according to Vienna’s Maria Vassilakou, it has to be worth it. Tune in live to #TTDC20: https://t.co/tAdyqL1NZy pic.twitter.com/he6LPjT32i

“Transport is not just about building roads,” said the World Bank’s Guangzhe Chen. “It’s about building thriving economies, communities, and connecting people to a better life.”

This year’s event was the biggest yet, with 1,200 participants and another 31,000 viewers online. There were more than 27 million Twitter impressions using #TTDC20. Join the conversation — we want to hear from you!

Talia Rubnitz is a Communications Specialist at WRI Ross Center for Sustainable Cities.