There’s no question we’re going through unprecedented times for public transport. Ridership is down anywhere from 60% to 90%. Transit agencies are hemorrhaging cash, with fare revenue following ridership down the tube. But the fact is that throughout the tremendous disruption caused by COVID-19, public transport has proven again to be an essential service itself.

In New York City, even with bus and rail ridership down 70% to 80%, roughly 1 million public transit trips were still being made every day by nurses, grocery clerks, building service staff and other essential workers. In China, some bus services have returned to 50% to 60% of pre-COVID ridership.

There is clearly a strong need to not only preserve these public transit systems, but improve the reach, quality and reliability of services. Strong public transit systems are not only key to building healthier, more resilient, more sustainable cities in the long run, they are also crucial to more equitable urban economies.

Many cities have been aggressive in installing new, pop-up bike lanes and wider sidewalks to take advantage of suddenly traffic-free streets and encourage safe, active mobility. Now is the time to rethink the allocation of public space to give public transport more priority too. Dedicated bus lanes and other forms of transit priority can help cities move people to their destinations faster under the current restricted conditions and can support increased ridership in the future.

Currently, there are over 5,000 kilometers (3,100 miles) of documented dedicated bus lanes around the world. As far back as the early 1960s, these lanes have been found to decrease travel times, given the right design, with the most dramatic savings from full bus rapid transit (BRT) designs like those found in Curitiba, Mexico City and elsewhere.

While tactical urbanism to install bicycle lanes or pocket parks is well known, it’s also possible to create quick-build bus priority lanes, such as painting dedicated “red carpet” lanes on high volume routes or creating road space for buses to jump traffic queues. With reduced vehicle traffic on city streets and many people still working from home, such lanes can now be put in place with much less disruption than usual and with more of an adjustment period as traffic returns slowly.

Some cities are experimenting with these interventions. In Porto Alegre, Brazil, the city is doubling the length of exclusive bus lanes, having just implemented 13.4 kilometers of dedicated lanes and an additional 6.5 kilometers coming this year. Washington, DC, announced several new bus lanes, including closing a key commercial corridor to cars entirely, allowing buses, bicycles and pedestrians exclusive access. Officials from Vancouver, Paris, London and San Francisco have indicated their intention to pursue similar plans.

Bus priority corridors can be put in as pilot projects, tested, and then improved or removed based on feedback. One example is New York City’s 14th Street busway, which debuted in October 2019. The city restricted private vehicle traffic from 6 a.m. to 10 p.m. and found bus travel times decreased by 14% while weekday ridership increased by 17%. The measures have now been made permanent and additional busways are planned, in part as an element of wider COVID-19 adaptations.

Rethinking bus lanes is also an opportunity to improve road safety. Certain design considerations can help reduce traffic crashes, particularly with pedestrians and turning vehicles, as outlined in a WRI report on bus priority design. Two key recommendations are to avoid contraflow bus lanes and to ensure right turning vehicles merge into the bus lane for turns properly and clearly indicate they may only turn right. Other research provides guidance and lessons from global experiences, noting there is no one size fits all approach and context by country and region may differ. 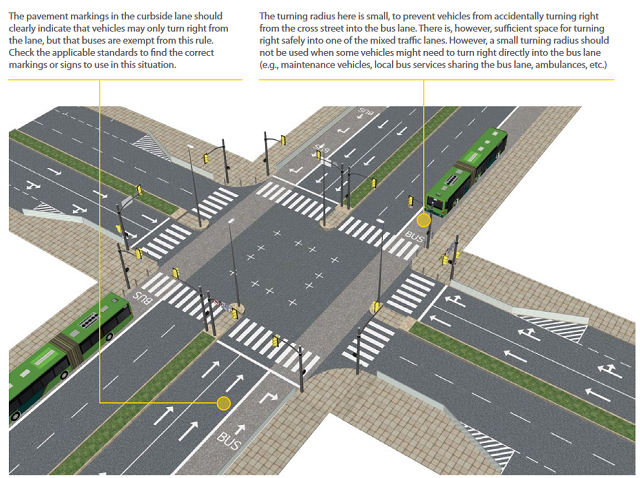 Curb, lane and intersection design can all improve road safety, both for drivers and vulnerable road users like cyclists and pedestrians. Image from Traffic Safety on Bus Priority Systems/WRI

Leaders would also be smart to center these interventions on issues of equity and access. A recent WRI paper finds that up to half of urbanites in Mexico City and Johannesburg experience restricted access to opportunity and basic services, leading to high travel burdens and exclusion. A review of equity specific to BRT systems found that while they have shown significant benefits to low-income groups in terms of travel time, access, and safety and health, benefits were skewed more toward medium-income users due to insufficient spatial coverage. Planners should focus new dedicated bus lanes on areas most in need of greater access to jobs and other opportunities – communities that have often been most impacted by the COVID-19 crisis as well.

Other measures besides dedicated lanes can also be taken to quickly decrease bus travel times, improve quality of services, and thereby support the financial health of public transport while increasing access to opportunity for more people.

On lower volume routes, curb extensions allow buses to stop without maneuvering in and out of traffic and can be done through temporary bus stop platforms, such as those seen in Spain, France and the United States. Such measures have the ability to reduce travel times by 5 to 20 seconds per stop, which can quickly add up.

To accommodate social distancing and allow for expanding ridership, some bus stops and stations likely need larger waiting areas and adjustments to how fares are paid. Providing pre-paid boarding or contactless payments onboard minimizes contact with drivers and attendants. Municipal bus operators in Beijing and Shenzhen are encouraging people to use cashless payment methods such as WeChat, Alipay or transit smart cards, for example. Not only do these systems reduce physical contact but they also enable better contact-tracing, if needed.

All of these measures to improve service should be considered in addition to the financial support for public transport that is so desperately needed and in addition to more support for alternative transport choices, like walking and biking facilities. It’s about building a system of components that enable more sustainable, safe and equitable cities.