Montgomery County Councilmember George Leventhal wrote a post for Maryland Politics Watch about his recent trip to Curitiba, Brazil, where he learned about bus rapid transit, since Montgomery County is exploring BRT as a transit option for its residents. (Recently, the county’s proposed Corridor Cities Transitway has been examining the bus option. And last year, the Purple Line was also in consideration as a BRT project, though Gov. O’Malley eventually chose light rail.) A self-professed light rail supporter, Leventhal recognizes some of the benefits of BRT and says it would be a good choice for heavily trafficked corridors like Veirs Mill Road, Georgia Avenue and Rockville Pike.

Leventhal had a chance to meet with Nancy Kete, the director of EMBARQ (producer of this blog) and Toni Lindau, director of the Center for Sustainable Transport in Brazil (a member of the EMBARQ Network). “It was a wonderful visit and Curitiba is a beautiful city,” Leventhal said. “I am so happy I made the trip.” Read about the lessons he learned, below:

Curitiba, a city of 1.8 million people, is the capital of the state of Paraná in Brazil. In late December, I visited Curitiba at my own expense and was briefed on its Bus Rapid Transit (BRT) system, one of the world’s first and most highly-regarded. Because Montgomery County is studying BRT as an option for its residents, I wanted to find out how it is working in other communities. I found many positive aspects and some less positive.

My sincere thanks to Silvia Mara Dos Santos Ramos of URBS (Urbanizacao de Curitiba, S/A), the city’s transit agency, and André Vinicius Marchezetti of transportation consulting firm Logitrans, who were the guides for my visit. Officials at EMBARQ, a project of the World Resources Institute, and its Brazilian Center for Sustainable Transport were also extremely helpful in helping me make contact with the guides in Curitiba.

According to Ms. Dos Santos, the rate of automobile ownership in Curitiba is 22%, while transit usage is 40% and the balance of commuters travel by motorcycle or motor scooter, or walk. This helps to explain why ridership of the BRT system is so high and why farebox revenues cover operating costs.

By contrast, in Montgomery County, 66% of workers drive to work alone while only 14.9% commute by rail or bus, according to the 2008 American Community Survey.

Another important difference is the price of gasoline, which is substantially more expensive in Brazil (R$2.49 Brazilian Reals per liter, or approximately U.S. $5.20 per gallon, while I was there) than in the U.S., making automobile travel substantially less affordable for working Brazilians.

The critical question is whether increased frequency, speed and convenience would persuade enough Montgomery County residents to ride the bus to make the system financially sustainable. Even in Curitiba, where per capita income was R$17,977 Brazilian Reals (U.S. $10,005) in 2006, upscale people do not ride the bus – and there are far more upscale people in Montgomery County, where per capita income is U.S. $35,684.

The county’s current Ride-On bus system generates only approximately 15% of its revenue from fares, with the remainder subsidized from general tax revenues. The current budget crisis has highlighted the Ride-On system’s significant expense to taxpayers, although the County Council has so far resisted cuts in Ride-On service proposed by the County Executive. How much more can we afford to expand the bus system even if the current 85% subsidy from all taxpayers decreased to a subsidy of 80%, 75% or lower? 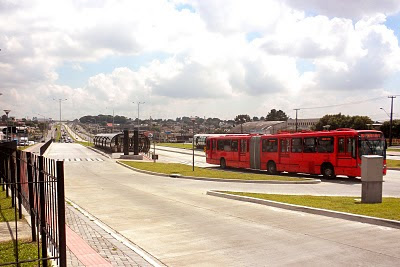 Curitiba has a long history of transit service, dating back to horse-drawn trolleys in 1887. Planning for 20 primary express bus routes began in 1966 and the system opened in 1974. For more than 35 years, primary roads have been designed to accommodate the BRT system. Municipalities in the Curitiba region served by URBS delegate management of the transit system to URBS, whose board members are appointed by the Mayor of Curitiba.

In Montgomery County, however, major roads would need to be redesigned to accomodate bus rapid transit. The state of Maryland’s recent reconstruction of Route 29 represented a critical missed opportunity to develop express bus lanes in the middle.

Our county’s primary roads (Route 29, New Hampshire Avenue, Georgia Avenue, Connecticut Avenue, Routes 28 & 198, Veirs Mill Road, University Boulevard, Wisconsin Avenue/Rockville Pike, and I-270) are owned, designed and maintained by the State Highway Administration. Close coordination between the county, the state and possibly the Washington Metropolitan Area Transit Authority (WMATA) would be necessary to accomplish the BRT vision. Ridership will be a very important criterion for winning federal funding – and ridership is the key question regarding whether the system can succeed here.

Accommodating through automobile traffic on primary roads will be another key issue. Because the buses travel on a dedicated route, automobiles may not cross primary streets at every intersection. In Montgomery County, this will affect many neighborhood streets whose residents are accustomed to being able to cross major streets or make left and right turns to exit their neighborhoods – all of which could be restricted with rapid bus routes down the center of major streets.

My visit to Curitiba was a great experience and there is no question that I would love to see similar technology employed in Montgomery County. In the near term, I will advocate for BRT on Veirs Mill Road, which along with University Boulevard has just received a federal grant for bus transit improvements, and Georgia Avenue. I am also optimistic about prospects for BRT on the Inter County Connector and the proposal for BRT on Rockville Pike contained in the White Flint Sector Plan, now pending before the County Council.

On the other hand, my visit to Curitiba did not persuade me that BRT compares favorably to fixed-rail systems as an effective inducement for riders to leave their automobiles at home. I will continue to advocate strongly for light rail on the Purple Line and, while I understand that cost factors may ultimately persuade Governor O’Malley to select BRT for the Corridor Cities Transitway, my preference remains light rail for that system as well.