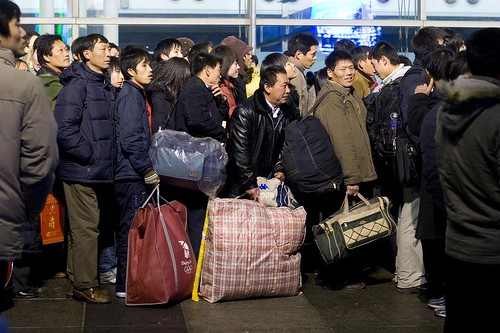 Millions of China's migrant workers wait in line to board trains each year, to make it home in time for Chinese New Year. Photo by Peijin Chen.

The world’s largest annual migration of people in the world takes place in China, when tens of millions of migrant workers leave their jobs in the city to journey home for the Chinese New Year.  Participating in the chaotic migration is about one-fifth of China’s population:  240 million people travel by bus and train over the 40-day period to rural areas, city fringes and mid-sized towns. Because of their transient nature, China’s migrant workers are often referred to as the liudong renkou, or “floating population.”

Migration in search of jobs

China, already facing massive demographic challenges, is also home to the most significant migration in the last 25 years worldwide: the movement of rural migrant workers to Chinese cities.  Since 1950, the percentage of China’s population living in urban environments rose to 40 percent from 13 percent. And that number is expected to climb to 60 percent by 2030. Another staggering statistic: China has 122 cities with more than 1 million people. The United States — comparable in land mass — has only nine.

Unique to China, the rate coupled with the sheer scale of urbanization and development is what makes these annual spikes in migration so crushing on the transportation and social system. China’s millions of migrant workers employed at factories, construction sites, restaurants and hotels are the single biggest source of income to most rural regions.  And in metropolises like Beijing and Shanghai, migrants comprise more than a quarter of the population, even as much of a third of city populations, according to some sources. The demographic patterns alone are so overwhelming it seems infrastructure, planning and policy cannot keep pace.

And the unregulated nature of migrant labor is a huge problem in China, not simply because cities are buckling under population pressures but also because workers without residency permits don’t have access to the same public services, and few have healthcare and formal contracts with their employers.

A push for high-speed rail

China will spend $300 billion over the next 10 years (compared to the U.S.’s $13 billion over the next five years) to build what the country anticipates will be the world’s most advanced high-speed rail system in an effort to alleviate strain on the system. Earlier this year the Chinese bullet train arrived at its first site: a north-south route from the commercial and manufacturing city of Guangzhou to central China’s Wuhan. The train clocked the world’s fastest average speed of a high-speed rail train, traveling at about 215 miles per hour.

There are 41 more high-speed trains set to open in China by 2020 (some sources say 2012 is the date).  Opening in the next few years will be a route from Beijing to Shanghai that will take a little under five hours (existing journeys on sleeper trains can take 12 hours.)  Chinese rail officials say, when completed, the new high-speed system will be able to carry more than 7 billion passengers annually.

Although the country is investing heavily in rail, there are underlying questions.  The location of future rail stops is unclear. The Wuhan-Guangzhou line stops at 18 different sites along its route and also runs a non-stop train twice a day.  Whether seasonal travel of migrant workers will be alleviated depends on both the new system’s accessibility to rural areas and the frequency of existing freight travel. Also, the cost of a single train ticket – a week’s worth of pay and sometimes more – is out of reach for much of China’s working poor.

Xie Weida, a railway expert, still thinks the system will bring improvements even if it prices out some Chinese. “High-speed rail can ease our transportation bottlenecks,” he says. “Migrant workers may not require high-speed trains, but if some passengers take the high-speed trains, that should relieve pressure on the ordinary ones.”

The “Last Train Home,” documentation of a buckling transportation system

In the film, “Last Train Home,“ director Lixin Fan captures the frenetic experience of migration during the Chinese New Year. Fan followed a Chinese family he met while wandering Guangzhou’s factories, deftly filming their intimate experiences over a three-year period while telling the epic narrative of a country’s challenges:

Every spring, China’s cities are plunged into chaos, as all at once, a tidal wave of humanity attempts to return home by train. It is the Chinese New Year. The wave is made up of millions of migrant factory workers. The homes they seek are the rural villages and families they left behind to seek work in the booming coastal cities. It is an epic spectacle that tells us much about China, a country discarding traditional ways as it hurtles towards modernity and global economic dominance.

The New York Times says of the 33-year-old director’s understanding of the issues underlying the migration:

He shows how: “the expropriation of farmland for urban construction have crippled agriculture, while an outdated housing registration system that denies education and social services to rural migrants in the city has created a sharp class divide and placed untenable strains on the traditionally close-knit Chinese family.”

China faces a number of pressing challenges given its pace of urbanization, but the advances in China’s rail system are extraordinary, whether they keep pace with growth or not.  And of course the crowding, chaos and social tensions as a result of change is part of life in China, where there’s just so many people.