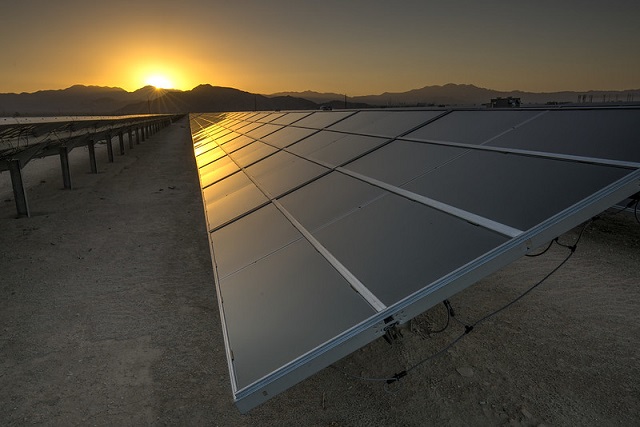 Cities are a core driver of climate change, accounting for more than 70% of greenhouse gas emissions. Precisely because they are such big GHG emitters, cities can be at the forefront in tackling climate change by leading the switch to clean energy. Over the last five years, more U.S. cities have started setting and acting upon their renewable energy goals. This will be critical if the United States is to achieve its Paris Agreement commitments, given the current lack of federal action.

New data shows how cities are making this change by signing deals that move their own municipal operations – and in some cases, their entire communities – away from fossil-fueled electricity and toward renewable energy.

A new tool from the American Cities Climate Challenge Renewables Accelerator, the Local Government Renewables Action Tracker, showcases renewable energy deals made by U.S. cities, counties, tribal governments, municipal utilities and community choice aggregations since 2015. Cataloging over 300 deals, the tool equips local governments with the resources to understand what other cities have accomplished, which can help as they develop their own renewable energy strategies and determine how to collaborate effectively.

In 2018 and 2019 respectively, renewable energy purchases made by local governments were over three times those made in 2017. This spike came not long after the federal government’s June 2017 announcement of its intended withdrawal from the Paris Agreement, an event that spurred many subnational governments to commit to formal climate and clean energy goals. Implementation of these goals, combined with the declining costs of renewable electricity, help explain the growing interest in clean energy procurement among city and county governments. 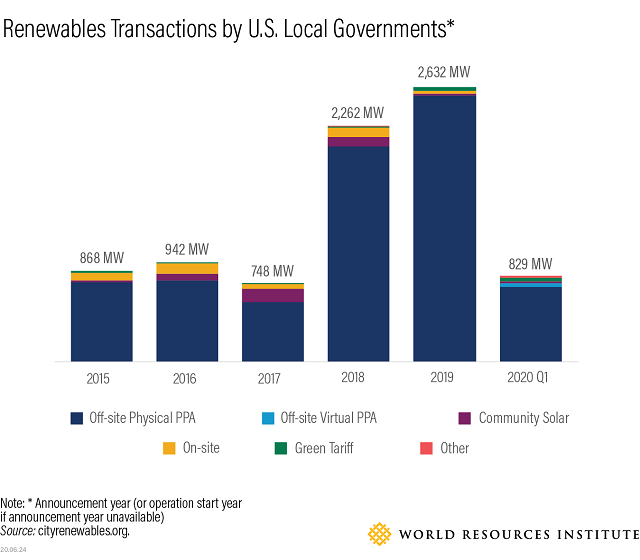 2. Most of the renewable energy capacity purchased by local governments in the last five years occurred in California and Texas, but procurement continues to grow substantially throughout the country.

California and Texas accounted for about 84% of the total renewable energy purchased by cities between 2015 and early 2020. The prominent role of these two states is no surprise, given that they are the country’s largest electricity consumers and enjoy easy access to abundant wind and solar resources. Both also allow electric retail choice and have the local autonomy needed to access renewable energy options such as community choice aggregations (CCAs). In doing so, local governments can aggregate the power demand of their residents and businesses to get more leverage to choose cleaner power sources, which could contribute to their higher rates of procurement.

There is also a lot of progress in other regions, including through community solar projects in Minnesota, Massachusetts and Washington. Collectively, there were more than 120 clean energy transactions by local governments in the other most active states. 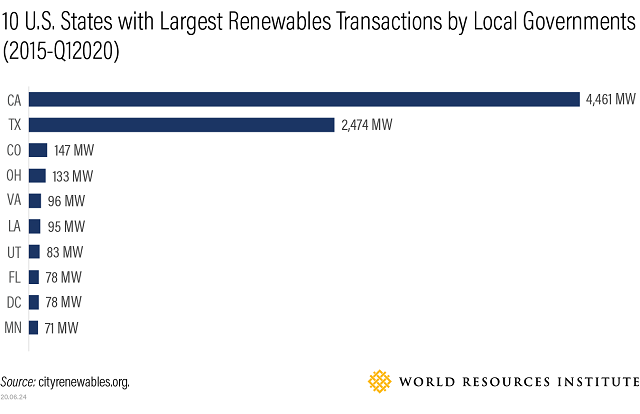 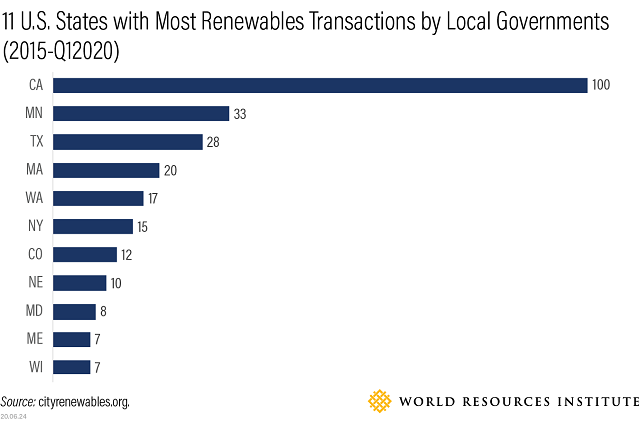 The tracker shows that 90% of the renewable energy capacity purchased by cities was completed through off-site PPAs, contracts between a buyer and a developer for renewable energy projects that are not located at the site of the buyer’s electricity usage. Off-site PPAs allow local governments to purchase energy from utility-scale projects, which means that these deals can be very large and cost-effective compared to other procurement options. This makes them a popular choice for cities, especially in deregulated electricity markets that allow retail electric choices. 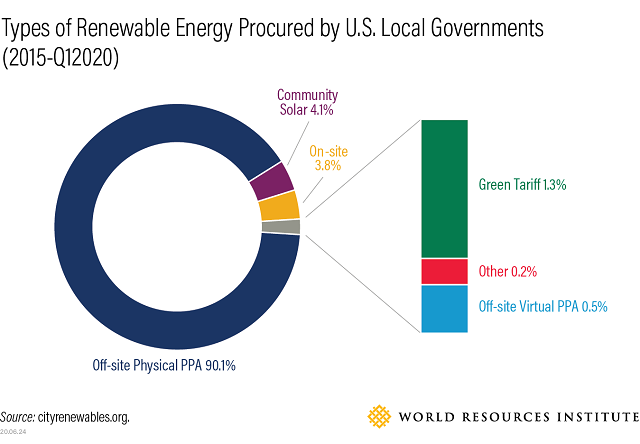 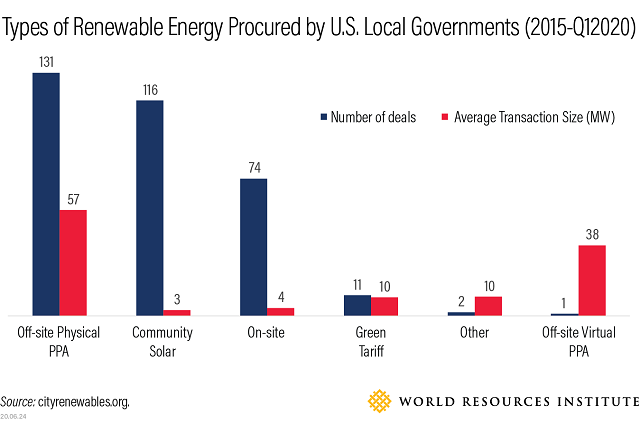 Although community solar and on-site projects have a smaller average deal size, these two procurement methods remain popular because they tend to be less expensive, and, for on-site projects in particular, allow local governments to host renewable energy projects on their own city- or county-owned property. For this reason, many cities, including Cincinnati, Los Angeles and New Orleans, built small-scale, on-site or community solar projects as a first step before signing large-scale, off-site PPAs.

4. On-site deals are most popular in the Northeast, whereas off-site PPAs make up most of the renewable energy purchases in California, Texas and the Southwest.

In the Northeast, most local government renewable energy deals are on-site projects. Favorable distributed solar policies, such as expanded net metering and policies like New York City’s Municipal Solar Strategy, enable a lot of on-site distributed generation. The modest rate of sunshine in this region has also led to relatively few large-scale renewable project options available for off-site PPAs, compared with the Southwest.

Meanwhile, off-site PPAs are most popular in California and Texas, as well as the Southwest and PJM electric markets, because of their abundant renewable energy resources and the relatively large amount of open space, which are convenient for developing off-site solar and wind farms. Moreover, 72 out of the 100 off-site PPA transactions in California were made by local CCAs that enable participants to buy power in bulk by aggregating their demand and signing long-term contracts. 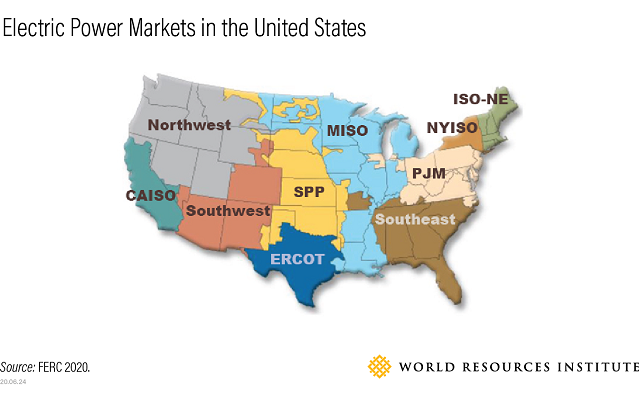 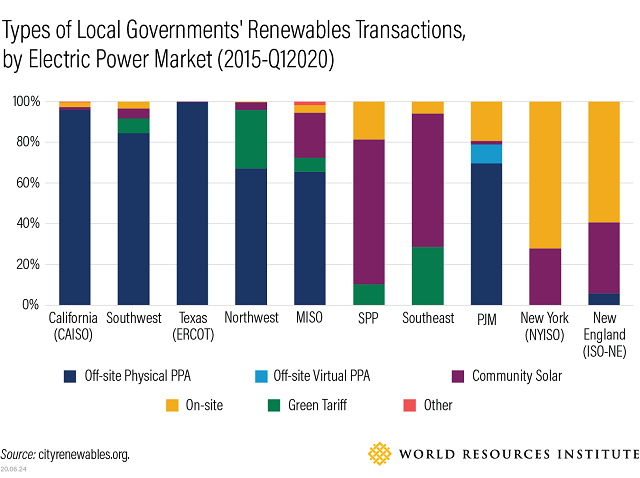 5. Solar leads nationally in terms of the number of deals and overall capacity, while individual wind projects are generally larger and have a strong presence in the West.

Solar accounts for 74% of overall capacity and 89% of the total deals purchased by local governments. Although the amount of solar energy a city gets varies by its location and weather, solar resources are more uniformly distributed across the United States than wind power, making solar more widely accessible and suitable not only for large projects where adequate space is available, but also for smaller on-site and community-scale projects. Given its daytime availability, on-site solar projects are also particularly well-suited for city and county governments, whose electricity demand often peaks during business hours. 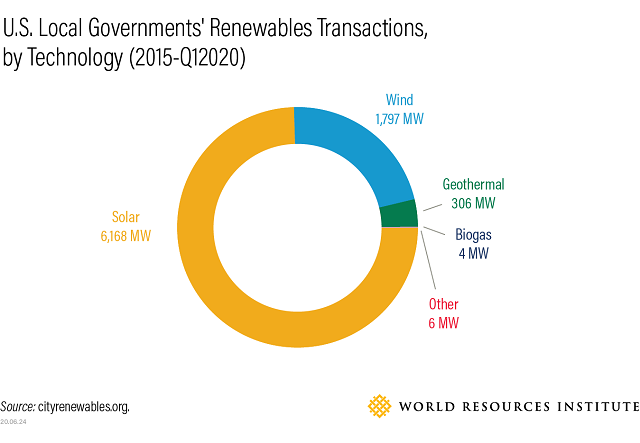 Wind, on the other hand, is by far the leader when it comes to individual project capacity, averaging about 72 megawatts (MW) per project, more than three times the average project capacity for solar. The lack of access to steady, unobstructed wind in cities typically makes urban areas unsuitable for distributed wind projects.

Although solar energy deals make up the majority of capacity purchased across the country, wind has a strong presence in the Southwest and Midwest, thanks to an abundance of wind resources. 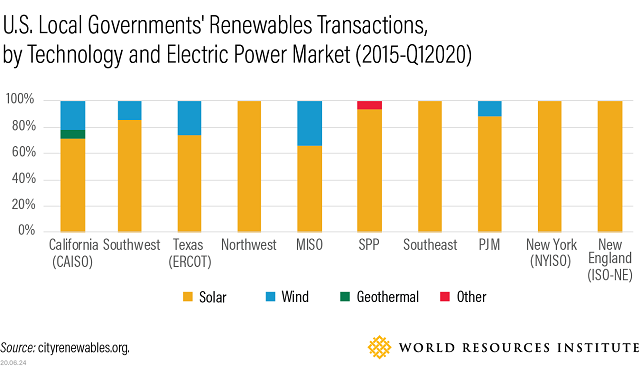 What’s Next for Renewable Energy in U.S. Cities?

To keep momentum up, many more local governments will need to enter the U.S. renewable energy market. There are growing opportunities and pathways for doing so as the efforts of early adopters have provided experiences to learn from, renewable energy prices continue to decline and more resources and tools are becoming increasingly available.

By signing more deals to procure renewable energy for their own municipal operations, cities can be a significant contributor to decarbonizing the electricity system and tackling climate change, especially in emissions-heavy markets like the Midwest and the Northeast. But looking beyond that, local governments can and should use their ambition to expand renewable energy to their entire communities, using approaches such as Solarize campaigns and similar inclusive community solar initiatives with an emphasis on low-income and minority neighborhoods.

Representing the majority of the U.S. population and GDP, cities are hubs for rapid learning and experimentation, with the potential to be a force that can reshape electricity use. To enable a clean energy future across the country, local governments will play an integral role in growing the renewables market and further accelerating these trends.

Tatsatom Gonçalves is a Research Assistant at WRI’s Energy Program.

Yuning Liu is an Associate on the City Renewables Accelerator team at Rocky Mountain Institute.