To let us know that it was moving forward on its Bicycle Transit Center  near Union Station, DDOT updated its Facebook account with a set of new pictures. New media! The station is looking like it’s nearing completion; installation of bike racks has begun. Now, then, seems like a good time to look at how this new bike station will affect cyclists once it opens.

The bike station has three components: parking, rentals, and retail. Let’s take them in turn, and then look at the sum effect. With regards to parking, the station is putting in 150 bike parking spots. These will be available for a small fee: possibly $1 a day or $100 for a yearly membership. Members will also be able to access the station after hours. For the security advantages alone, there will certainly be 150 cyclists willing to pay those kinds of fees. Cyclists parking at the bike station will also be able to use changing rooms, though there are not bathrooms or showers.

The parking elements of the bike station, therefore, seem more likely to improve the quality of the commute for existing cyclists than to draw new bikers onto the road. The lack of available bike parking is precisely the kind of issue you start to think about once you make it to work on your bike.The lack of a shower or a safe-feeling bike path, on the other hand, are the kinds of concerns that make the difference between getting on a bike in the first place or not. However, once the Metropolitan Branch Trail is completed, the bike parking could be a really important part in retaining riders. Until then, I don’t think that the numbers of bike commuters will change dramatically (though it will be extremely popular).

I would lump the retail elements of the station in with the parking elements. It will be very convenient for cyclists using the station to buy bike gear or get a repair right there. It’s hardly as if it’s currently impossible to do these things, though. Moreover, there aren’t drivers who would hop on a bike if only they knew that bike repairs were available next to their office. Again, this will be very good for those who already cycle—who of course deserve quality of life improvements the same as any other commuter—but won’t be pulling new cyclists onto the roads.

The bike rental portion of the station, similarly, will be popular without being transformative. Here the location of the bike station at Union Station makes perfect sense. There is a built-in market of tourists who will take real advantage of this service. Some set of people will rent a bike to tour around the city, rather than jumping on a tourmobile or something. However, since you’ll have to return the bike back to the bike station, it won’t really replace any trips to anywhere. You’ll end up right back where you were and hop on the subway or in a cab. If it scales up to the point where the added bike traffic generated by tourists helps drive the creation of more cycling infrastructure, however, that could really help D.C. cyclists. If not, or until that point, a bike rental station will be a nice tourist amenity but not one that moves the region towards sustainable transport.

Holistically, however, there’s something important about building this bike station that will be transformative. It is a major symbolic statement that bikes are an important part of the transportation infrastructure of the District. Placing the bike station next to Union Station isn’t important because it’s the densest job center in the District or even the most intermodal location (since MARC, AMTRAK and Metro during rush hour don’t allow bikes on). It’s important because Union Station is the symbol of transportation’s value in D.C. and bikes are now a part of that. The relatively high-design structure is more evidence that DDOT intends this to be a statement as much as it intends it to be useful. In this respect, the bike station can be truly transformative, as thousands of commuters every day will see it, think of cycling and receive a positive message about it.

The bike station could maintain that symbolic power but become much more functionally transformative if it were integrated with SmartBike, as a sort of SmartBike headquarters. 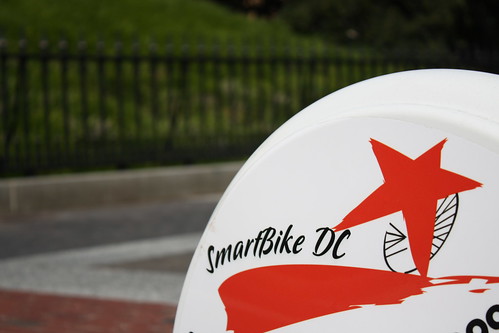 An expanded SmartBike system, which might become a reality, really would draw new riders out of their cars. Bike storage and security is taken care of on both ends, costs are lower, and bike rentals, you can take one-way trips. Bikesharing makes particular sense at Union Station, where there are both people finishing their commute at their office and others just beginning a new intra-District leg. Integration with SmartBike shouldn’t change the nature of the bike station—there’s no reason to take away needed cycling amenities—it should complement it. As bikesharing puts lots of new riders on the road, then you’ll get more people who own their own bike as well and will want to take advantage of bike stations (hopefully with showers). The combination of those two programs is what will push this from improving the commutes of individuals to improving the commuting system.

One quick question to end on. There’s a lot of discussion about market-based pricing for car parking that happens among sustainable transport advocates. As this bike station will be charging for bike parking, which is usually free (and as the bike station is being paid for with public funds, though will be privately operated), I think that it raises the question of what cyclists ought to be paying for parking and how that compares to cars. Has anyone put some good thought into this yet?