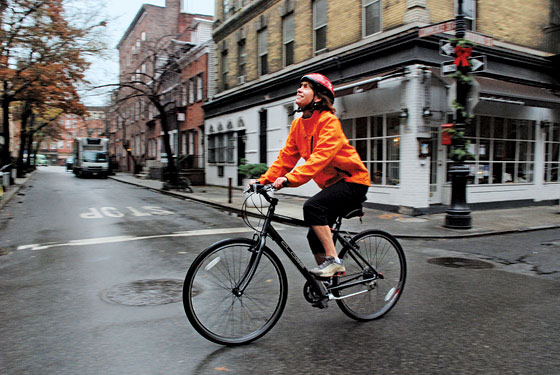 Kate Rockwood of Fast Company magazine interviewed six entrepreneurial transit experts about how to get city dwellers out of their cars for the September issue’s “Fast Talk” department.

Janette Sadik-Khan, commissioner of the New York City Department of Transportation, talks about her city’s Green Light for Midtown project to turn Times Square and Herald Square into pedestrian zones. “Half a million people go through Times Square each day. It’s 90% pedestrians and 10% vehicles, yet 90% of the space has been allocated to vehicles.”

Jerome Guillen, director of business innovation for Daimler AG, explains the benefits of Car2go, which lets people rent Smart cars for however long they want, without needing reservations or picking up and dropping off in the same place. “This flexibility allows us to reach the next generation of drivers.” The first pilot program was launched in Ulm, Germany; it will be available in the U.S. later this year, in Austin, Texas.

Car2go in New York. Photograph by Kai-Uwe Gundlach via Car2Read.com.

Andrea White-Kjoss, CEO of Mobis Transportation/Bikestation, is opening up full-service cycling stations from Berkeley, Calif. to Washington, D.C. to encourage people to ditch their car for a different set of wheels. “You can park 36 bikes in the same space as you need to park one car.”

Bikestation is building a Bicycle Transit Center next to Union Station in Washington, D.C. Rendering by the District Department of Transportation.

Grant Harrison, vice president of the Innovation Center for Humana, created B-cycle, automated kiosks that lets riders rent bikes for the same price as riding mass transit. “We’re hoping to become a health-creation company. Fifty percent of people drive to work on less than 5 miles in theri cars. They could be doing this on a bike. If somebody starts commuting this way, within a year, he or she will have lost 13 pounds on average.” The company plans to bring 50,000 bikes to a dozen U.S. cities in the next three years. Watch this cool video from the B-cycle Web site:

Michael LeJeune, creative director of Metro Design Studio, made mass transit cool in Los Angeles by designing a hip campaign for the Metro Rail’s Gold Line light rail system. “We’re trying to inject a sense of fun and personality. It’s about getting people to engage with the brand more and then get out of their cars.”

Kerstin Hanson, business innovation manager for Volvo Group, created a cell phone application, “CO2 pedometer,” that measures commuters’ carbon emissions based on means of transportation and distance traveled. Motivated by the data, members of the app’s first test group reduced their carbon footprint by 30 percent. “We wanted people to make a conscious choice by visualizing the consequences of their driving habits.” Volvo’s app isn’t commercially available, yet. But other apps, like this CarbonTracker for the iPhone, shows similar data.