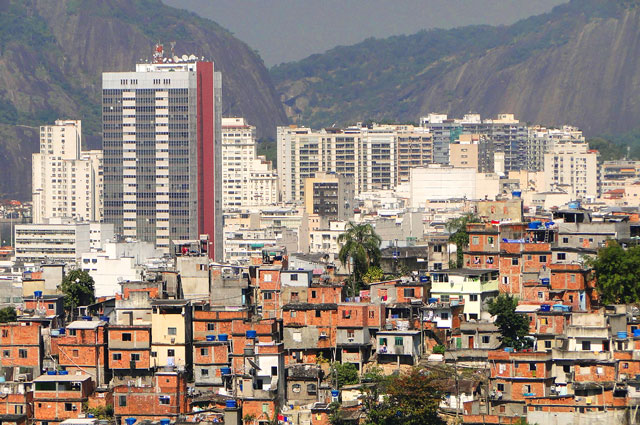 Stark inequality is present throughout cities in Latin America. In Rio de Janeiro, Brazil, this gap is evident at the interface between the Favela neighborhoods and tall office buildings. Photo by Adam Jones/Flickr

The narrative about global inequality and poverty often focuses on rural areas in the global south, with a heavy emphasis on sub-Saharan Africa and South Asia. But the reality is that poverty is becoming more concentrated in cities across the world. WRI’s own framing paper for its flagship World Resources Report, Towards a More Equal City, highlights this increasing “urbanization of poverty.”

Rapid urbanization and skyrocketing inequality are now triggering alarms, and nowhere is the gulf between the haves and have nots wider than in Latin America. Nineteen of the world’s 30 most unequal cities can be found in this region where 80% of the population lives in cities as compared to the global average of 51%.

Latin America has a long history of inequality in political, social and cultural structures, and for millions of people these inequalities manifest as health disparities and exclusion from city life and essential services. Within this context, policymakers are looking to urban health researchers to better understand what makes people healthy and happy in urban environments.

In 2017, the Dornsife School of Public Health at Drexel University partnered with a diverse group of research institutions from across the United States and Latin America to launch the SALURBAL research project (Salud Urbana en Latin America, or “Urban Health in Latin America”). The project, funded by the Wellcome Trust’s Our Planet, Our Health initiative, collects data on numerous elements of the social and built environment in more than 350 Latin American cities and analyzes their impacts on health outcomes. The results of this multi-year effort will help provide a clearer picture for policymakers of the region’s rapidly changing cities.

To date, SALURBAL has compiled mortality records for all recorded deaths in 366 cities across 10 countries for 2012-2014. The project has identified striking disparities in life expectancy and causes of death. Notably, some of the cities with the highest life expectancy in the region – Panama City and Santiago de Chile, for example – also have the widest gaps in life expectancy. 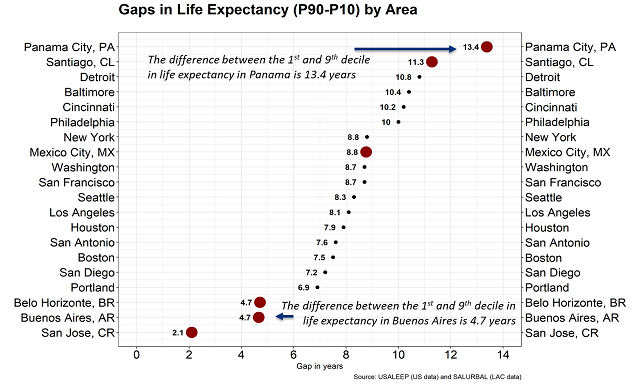 Further examining these gaps in life expectancy can tell us important things about the ways that the urban environment can affect health, and how health outcomes can vary within a city depending on where someone lives.  The SALURBAL team is working to explore differences in mortality based on geography to produce results that will help policymakers understand how the characteristics of neighborhoods within cities can predict the magnitude of inequalities in life expectancy, as well as the impacts of policies designed to address these inequalities.

SALURBAL researchers are also working to describe the challenges and gaps in the available mortality data, including significant undercounting in some cities, and to develop recommendations for local authorities about the ways they can improve the quality of their data to support future evaluations and evidence-based policy development.

Understanding the Impact of Urban Form

WRI’s recent publication, Upward and Outward Growth, underlines the inequities that can arise from the sprawl-like urbanization taking place across the global south. Housing costs and poor access to land often drive low-income and other marginalized groups away from city centers in search of affordable housing. And the farther someone lives from a city’s core, the less access they tend to have to basic needs and services, such as clean water, waste management, electricity, transportation, employment opportunities and health care.

SALURBAL’s emerging results complement these findings by increasing understanding of the ways in which neighborhood-level design and other aspects of the urban environment impact health and well-being. The project is also evaluating the effectiveness of policy interventions to address health challenges and inequalities from the transportation, food and housing sectors.

Building more equal – and healthier – cities requires an understanding of these and many more factors determining each city’s unique health profile, and the impact of urban policies and interventions on the people who live there. Data collected by projects like SALURBAL can help diagnose the root causes of urban challenges and guide the development of targeted, effective, and sustainable actions that maximize co-benefits across sectors and promote both human and planetary health.

Want to learn more about SALURBAL? On September 4, 2019 in Philadelphia, PA, the project will host a public, full-day discussion on levels and determinants of urban mortality in Latin American cities. Learn more and register for the event here. Follow the project on Facebook and Twitter at @lacurbanhealth.

Claire Slesinski is the Senior Program Manager for the SALURBAL Project at Drexel University.

Katy Indvik is the Policy Engagement Specialist for the SALURBAL Project at Drexel University.

Adriana Lein is the Policy and Dissemination Coordinator for the SALURBAL Project at Drexel University.

Usama Bilal is an Assistant Professor at Drexel’s Dornsife School of Public Health and a researcher on the SALURBAL project.