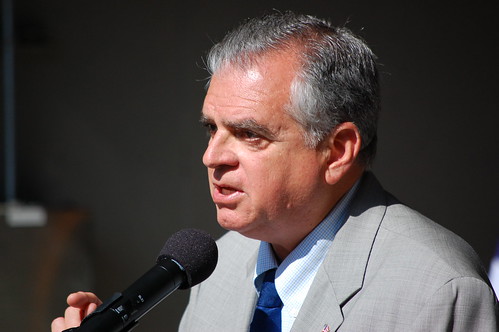 Secretary of Transportation Ray LaHood gave a talk today at the Center for National Policy (great name for a think-tank, no?) about the economic impact of transportation. In other words, he spoke about how awesome the stimulus is. According to LaHood, it’s been very awesome. ARRA has had a “tremendous impact” and is “the most sweeping and complex” domestic package in years. This wasn’t really the interesting section of the talk, though—was LaHood going to say that the stimulus wasn’t going as smooth as butter? Perhaps the one really unexpected statistic is that in half the states, DOT stimulus is heavily concentrated in those counties with the highest unemployment.

The questions, which took up the majority of the time, were much more revealing, though. I’ve got my full real-time notes at the bottom of the post, so look through those for the source material, though please ignore typos and unclear remarks. I’m pulling important points and commentary up here, though.

LaHood believes that because DOT works so closely with states and local government regularly, it has been able to spend its stimulus money more effectively than any other department. In his words, local officials know what works best and they’re not afraid of sharing that information with DOT. It’s good to see a federal bureaucracy that, at least at the top, believes in local knowledge rather than rationalized uniformity. It’s very different from how DOT normally runs (and still to a large extent does below the top levels).

When LaHood was asked about the transportation bill reauthorization, including from a Blumenauer staffer, he was ruthlessly on message. His answers were shorter and more direct than at any other time. There was a lot of “We support an 18 month reauthorization” and other such statements.

We learned in response to a question from Fairplay magazine, a maritime-related journal, that a large portion of the $1.5b in discretionary ARRA spending will go to ports, partly because port infrastructure had no other way of being funded in the stimulus bill. The other priority that LaHood mentioned for the discretionary spending was intermodal plans. I’d refer you back to Roy Kienitz’s (the Under Secretaroy of Transportation for Policy) remarks at the TPB priority bus conference for a greater sense of how those intermodal dollars will be spent, particularly in the D.C. region.

Elana Schor from Streetsblog Capitol Hill asked where the administration stood on CLEAN-TEA, a proposal to spend revenue from cap-and-trade auctions on transportation. In the Senate, the number is at 10% while the House had only 1%. LaHood answered that the Administration didn’t want to get involved in the Senate’s work, but would certainly be weighing in during conference.

I was really impressed with the way that LaHood spoke about livable communities. When asked specifically about it, he was visibly more animated than with any other previous question. Now LaHood is a professional politician, so you have to be careful. But I definitely noticed a qualitative difference in the way he answered that question. I also liked his framing, that this is not the DOT or anyone else telling people what they want but that there is pent-up demand after years of not investing in most modes of transportation. In his words, “The idea that an hour of congestion to go to the doctors – people are tired of that… People want to be able to ride their bike to work, walk to work, take a light rail, take a bus, take a streetcar.”

DC residents should also be very heartened by his response to a question about the Red Line Crash. He began by definitively stating that WMATA is “America’s Metro system” and proceeding from there. He also spoke eloquently about the work that WMATA did in enabling 2 million people to gather on the Mall for Pres. Obama’s inauguration. When he said that the federal government had a special responsibility to WMATA, I believed him.

Finally, I got to ask him a question – very exciting. I asked how in stimulus spending DOT had balanced the short-term economic need for speed and jobs with the long-term economic need for livable communities and a reshaped transportation network. What did they do when the highway repaving was the fastest? The answer was very disappointing, though. LaHood dodged it by listing the dollar amounts that ARRA had allocated to transit, high speed rail and AMTRAK. That’s all well and good, but doesn’t really address how that’s different from pumping money into business as usual.

Even so, I’m still quite convinced that Ray LaHood is one of the very most innovative and important Secretaries of Transportation that the country has ever had. Of the entire list, only Neil Goldschmidt jumps out as obviously important. Good choice, President Obama.

Intro: DOT was founded in 1967. Under 15 preceding secretaries, has any had more important moment for transportation?

Focus on “tremendous impact ARRA is having.” “The most sweeping and complex” domestic package.

ARRA designed as 18-month roll-out, using well-established procedures. Now we are only 6 months in. “We don’t want the dog to start barking” – Biden. No earmarks, boondoggles, special projects. Not one serious abuse of funds, so far.

Difficulty of measuring, since we don’t know what would happen without it. Also don’t know how next year of spending will help.

Transp. Is 10% of US GDP. DOT has $48b in stimulus – 2/3 of normal budget. Today, $21b is available to states. FAA has already spent its full stimulus amount. Highways have done 2/3. $1b in AMTRAK approved. $3.2b for transit, with $5b in the works. About to announce shipyard program. Money moving out door twice as fast as normal (and remember that outdoor construction season is just ramping up).

Lower bids mean that have more projects than expected.

Hundreds of proposals for HSR.

MDOT has recalled all of its laid-off employees b/c of stimulus.

Are stimulus projects in the areas that need it most? Half of funds going to 40 PA counties with worst unemployment. Cities are benefitting too: congestion, emissions, mobility. 90% of transit funds go to cities large and small. Conclusion: “It’s working and it’s on track.”

Q: (Peter Kovler, CNP board chair) Is there a lessons learned system? Yes, it’s VP Biden and Sec LaHood talking to state and local officials. They know best and they’re not shy of saying when it’s not working. Thinks that b/c DOT has best relationships with states and local officials, they’ve had the most effective stimulus spending of any department.

Q (congressional staffer) How close is DOT involved in Auto Task Force? A: LaHood is member of Task Force and gets to participate in the discussions. No president has taken more of an interest in supporting American auto industry than Pres. Obama. Chrysler making cars again, GM out of bankruptcy, cash for clunkers. DOT also involved in setting CAFÉ standards – proud to have worked with EPA for the 35mpg CAFÉ standard.

Q: (Am. Soci. Of Civil Engineers) 18 month extension of transportation bill. Are you looking at reauthorization as Stimulus 2? A: Doesn’t think Congress could possibly have a new bill on Obama’s desk by Sept. 30. Happy to see that Boxer’s committee passed 18 month extension today.

Q (Meredith Singer, IBM) What can you do to make “intelligent” transportation systems? A: Real commitment to research at DOT – stepping it up. How do we get to livable communities? RITA is research arm. “Research is about the future.”

Q (Cong. Blumenauer aide): What about the Voinovich 12 month extension? A: It was defeated, and we want 18 mo.

Q Susan Meyer, Spokane transit CEO. Gushing about impact of stimulus, b/c sales tax revenue down. And using hybrids. A: “I didn’t plant her.”

Q Fair Play Magazine: Given that imports/exports move through metros, shouldn’t more money go to port complexes? A: Look at the $1.5b in discretionary and what we do with it. We expect intermodal and port applications. Emphasis on Marine Highway to relieve congestion. Innovative approach to moving a lot of freight.

Q Elana Schor: CLEAN-TEA – 10% of allowances in Climate Bill to Transit (1% in House) What do you think? A: We’re going to let the Senate have their debate. Admin. Will weigh in in conference.

Q: Motor equipment manufacturers association: tax incentive for safety features for commercial vehicles. How do you feel about tax incentives vs. mandate for safety? A: Safety is always #1, in all our modes.

Q: Japan Broadcasting company: What is Japanese role in building new RR system? A: Has met with ambassador. Wants to take a trip over there to see the HSR. President wants to add another $5b on top of the $8b for HSR.

Q Washington Trade Daily – What is status of Mexican trucks conflict, re: NAFTA? A: Program terminated in bill that passed Congress this year. He’s personally talked to 28 members of Congress about their safety concerns. Proposal pending at the White House – thinks program should be restarted.

Q Alexei Mostros, WaPo Half states still haven’t spent their stimulus money on high-unemployment areas. What more can you do? A: Sent a letter to the governors. Conference call with state DOT directors around the country today. But blames it largely on paperwork. “There’s no disagreement.”

Q US Resources (?). California county is building transfer facility with plug-ins and park-and-ride and affordable housing. How can you make sure that rural counties who do the right thing get rewarded?

Q: (FTE.org)How stimulus funds will be used to create more livable communities? How connect workers with existing jobs? A: Livable communities is the top of the list of five priorities? “Idea that an hour of congestion to go to the doctors – people are tired of that.” “Portland is the model for this.” Can be at neighborhood level, not just city level. “People want to be able to ride their bike to work, walk to work, take a light rail, take a bus, take a streetcar.” He really does seem to mean this – he totally just lit up. “This is what the people want.” You can create a lot of jobs.

Q PRTN Red Line crash and calls for investment in local infrastructure. Any special local projects? A: “This is America’s Metro system.” “When I saw 2 million people gathered on the mall” for inauguration… We believe obligation to be helpful to WMATA in providing resources in terms of safety.

Q: Me! Balance of shovel-readiness and long-term livable communities? A: There should be a Title for Livable Communities in next authorization. In economic recovery part – HSR, 8b in transit money. Some has gone to Portland streetcar program. Thinks they’ve taken the ARRA to jumpstart livable communities.

Q Howard University: Is there any provision for language access in ARRA? A: Not in the DOT portion.

Q Joan Lowey AP: HSR manufacturing is in the other countries where they have that expertise. Do you expect contracts to be foreign or domestic? A: These people are coming to America. They get to decide if they want to partner. I think regions are going to want extra investment in US – foreign investor should take old car factory in Midwest and build things there. Not DOT’s decision.

Q President of US Maglev Development Corp: what are other three priorities? Safety, research, HSR, livable communities and NextGen.

Q John Crowley Reuters: Do you have a good sense of where private investment will come from, given economy, and what are the expectations from companies? A: Almost all of Las Vegas plan is private-invested money, when that comes out. You’re also going to see private investment for laying down national broadband once they know that they don’t have to do the entire investment. (In follow-up, Reuters reporter calls Transportation bill the “highway bill.”