Today’s post on BRT for the Purple Line seems to have sparked a flurry of anger on Twitter. We’ve got:

and in response to my tweet “Agree report should mention land use!! But no reason to think that hi investment BRT sparks less TOD.”

Follow theoverheadwire’s second link – Who knew that BRT vs. LRT had such passionate opinions behind it! You’d think that GM was buying out all the streetcars again. But since there have been capital letters flying across the Twittersphere, I thought I’d pull it back to a format where we get to use complete sentences.

There are two separate critiques of my position going on here. The first is about land use. Specifically, this is an argument that light rail creates much denser development around it than BRT does. The second critique that is going on is that BRT might be fine now, but won’t be once the political process has some time alone with it.

I think that the second critique is absolutely correct. In fact, in my original post, I write that “So which side has the better argument? It depends.

Specifically, it depends on how closely you think that BRT can substitute for light rail or more accurately, the extent to which Maryland will make BRT a close substitute for light rail.” The Overhead Wire clearly believes that any BRT plan is too vulnerable to becoming another El Monte Busway. In my words, he doesn’t believe that Maryland will make BRT a close substitute to light rail. I won’t (and didn’t) claim to know enough about Maryland politics to say whether or not he’s right.

I will say that my closest personal experience with a BRT line is in Boston, where a new BRT line, the Silver Line, was built over the last decade. The Silver Line is actually two disconnected routes. One goes from downtown into Roxbury; the other from downtown to South Boston. The first section is basically an express bus. It mostly has a dedicated lane that it must share with cars turning right, but not even along the whole route. The second section is legit BRT. There’s prepayment, dedicated underground lanes and very permanent stations. The Roxbury section charges a bus fare; the South Boston section charges subway fare. Take a look at the difference between the stations on the two lines to really understand the difference. 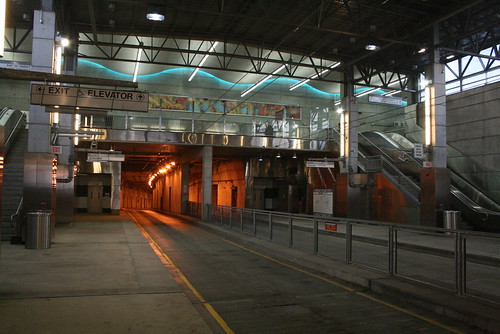 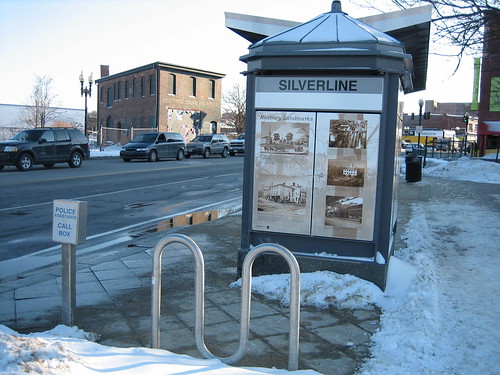 For some reason, this one project turned out completely differently on the two lines. I can’t imagine it might have something to do with the fact that one of these neighborhoods is low-income and non-white, while the other is one of the more politically powerful neighborhoods in the state?

What I’m trying to say with the Silver Line story is that in Boston, an astute observer could have predicted that BRT would mean one thing here and one thing there. If I had that ability with regards to Maryland and could answer which side of the Silver Line a BRT Purple Line would look like, I’d have given a definitive answer rather than an “It depends.” If someone has good reason to believe that in this particular case we are likely to see “BRT” as opposed to BRT, then they should say so.

On to the second critique, that BRT does not spur TOD. BeyondDC has challenged me to give examples. First, kudos for adding the “in US.” BRT has, as BeyondDC knows, been implemented more and better outside the States than in them. But he’s also right to say that the U.S. context is not the same as the Colombian or Mexican context and that you can’t easily compare across them. Moreover, he’s right that a lot of BRT in America is pretty pathetic. If your benchmark for BRT is something like Albuquerque’s RapidRide, which is really an express bus plus, then you’re not going to see a tremendous amount of TOD.

But I think that two systems that really are BRT, with all the bells and whistles, have seen TOD. Those are the Orange Line in L.A. and the South Boston side of the Silver Line. On the Orange Line, there were plans to build California’s largest TOD, the $1.2 billion El Monte Transit Village. It does turn out that the developer was just arrested for embezzlement and fraud, which ought to set back the project a bit (as will the complete collapse of the California real estate market), but they really were planning to build the kind of mixed-use development you want to see. There are also these plans for the Sepulveda station. And South Boston has been undergoing a complete redevelopment. That’s not happening in a vacuum—the Big Dig and the new convention center helped too—but the Silver Line is definitely part of that story. This newsletter from Rutgers’ Voorhees Transportation Center adds some more detail to each case.

I think that both of these examples hold up strongly. But I would add a more theoretical argument to the empirical one. Each of the qualities of light rail that drive economic development can exist in a BRT system. If the system is grade-separated, has pre-payment, has permanent stations, is easy to navigate, is as dependable and comes as frequently, and so on and so on, then I do not understand what the difference is, in terms of economic development, between rails and wheels. I know that’s a big “if,” but given that I’d only advocate for BRT if I thought that Maryland would build such a BRT system, it is the correct hypothetical.

Finally, I’d like to address one critique that the original WRI report received, namely that the organization has never supported any actually existing light rail proposals. I can’t speak for the organization at all, but I personally think it’s really important that the Silver Line here in D.C. isn’t going to be BRT. It would be awful to have to take the Orange Line out to Falls Church and then transfer onto a bus. BRT would make no sense, wouldn’t attract nearly as many riders and would be a waste of money. It just seems to me like the Purple Line is a place where BRT would work well.