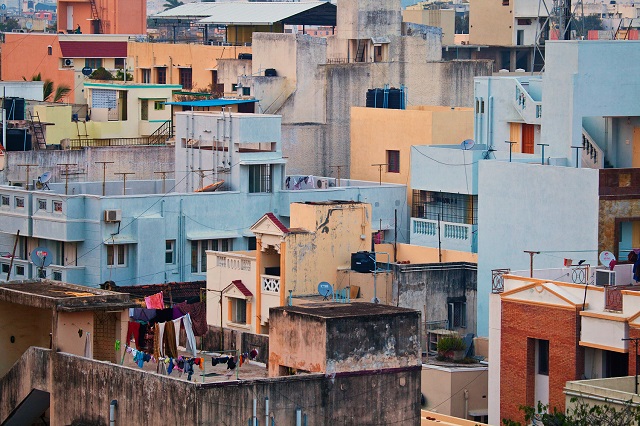 India is ground zero for extreme heat. More than 6,100 people have died from heat events since 2010. Half of the country reeled under severe heat waves this summer, when temperatures reached over 48 degrees Celsius (118 degrees Fahrenheit) in many places.

The urban heat island effect makes these extreme events even more severe in cities, which are warmer than their surrounding rural areas due to concentrated human activity and construction. The temperature difference between a city and its surrounding rural area can be as much as 6 degrees Celsius (10 degrees Fahrenheit) in some cities.

While a combination of meteorological factors – including atmospheric pressure, wind patterns, precipitation and climate change – cause heat waves, Indian cities’ buildings have a lot to do with the heat residents feel.

Urban heat islands are directly linked to the shape, arrangement and use of buildings, and their relationships to streets and open spaces. Building design can aggravate, or improve, the impacts of heat waves, urban heat islands and local air pollution. For example:

Because India’s extreme heat and its impact on people is poised to worsen with climate change, increased population and rapid urbanization, India has taken aim with a Cooling Action Plan, the world’s first national policy roadmap to address cooling demands. However, urban heat islands are mentioned only once in the document and concrete steps to address the issue are missing. Mitigating urban heat islands must be at the core of this policy, which is set to be implemented in the next few years.

Government agencies can use remote sensing and other technologies to map and monitor urban heat islands to help identify vulnerable regions. Assessments on the amount of vegetation and presence of water, as well as materials used in buildings, can determine how hot neighborhoods can get. Having this information can help disaster management agencies better plan and implement actions during heat waves.

Large-scale housing programs, including Prime Minister Narendra Modi’s Housing for All scheme, which calls for the construction of 20 million houses by 2022, must not ignore urban heat islands and the growing intensity of heat waves. The initiative must incorporate mandatory requirements on building resilience, including low-cost passive cooling measures. The solution to minimizing urban heat islands lies in the way in which we plan, design and construct our buildings – not in the production of more air conditioners.

Cooler cities can only become a reality if all their stakeholders join hands. Together, governments, urban planners, architects, real estate developers, building owners and residents need to be innovative as they design better buildings that ensure cooler, more efficient cities.

Bharath Jairaj is Director of the Energy Program at WRI India.

Sumedha Malaviya is Senior Manager for the Energy Program at WRI India.