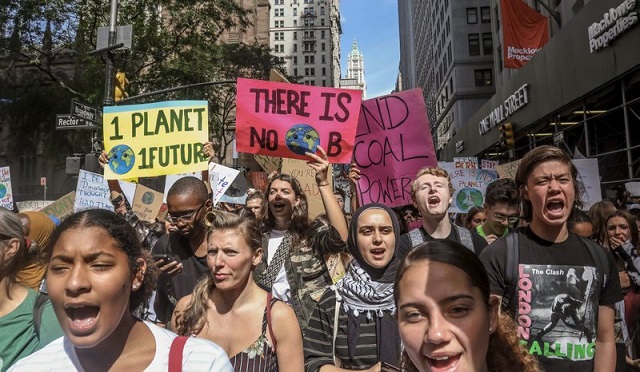 Climate activism movements can now be found around the world. Photo by Bebeto Matthews/AP Photo

The world was not kind to the environment over the past decade, the warmest in recorded history. Superstorm Sandy caused more than $70 billion of damages in the United States. Cities like Cape Town, South Africa, nearly ran out of water. Record floods killed 1,300 people in India and Pakistan. Fires burned more than 22 million acres (9 million hectares) in California, Amazonia and most recently, Australia, destroying forests, homes and human lives.

New global targets – including the Paris Agreement on climate change and the Sustainable Development Goals, both adopted in 2015 – were notable bright spots. But it’s unclear if the world will be able to deliver on these ambitions in the coming years.

Steer offered insights at WRI’s annual Stories to Watch event in Washington, D.C. about the issues and actors in 2020 that could make or break the coming decade. Here’s what to watch this year:

Three sustainability challenges will be especially important in 2020: the ocean, biodiversity and climate change. These issues are significant on their own and in how they intersect – curbing climate change improves the ocean and wildlife; ocean-based actions are essential for reining in emissions, etc. “All are interrelated, and all three together matter a lot,” Steer said.

1. Setting a New Course for the Ocean

The ocean is already polluted, overheated and overfished. A recent Intergovernmental Panel on Climate Change (IPCC) report found that if greenhouse gas emissions continue unabated, climate impacts to the ocean will cost the world $428 billion by 2050. Better managing the seas is important not only for food security, livelihoods and economies, but for mitigating climate change. Research from the High-level Panel for a Sustainable Ocean Economy found that ocean-based actions could deliver 20% of the emissions reductions needed by 2050.

Key moments in 2020 will tell us if leaders will continue with business as usual, or whether they’ll adopt a new narrative – one focused on safeguarding the world’s “blue economy” to fight climate change and protect livelihoods. Watch what they do at the second UN ocean conference in Portugal in June, if the World Trade Organization agrees to cut harmful fishing subsidies at its June meeting in Kazakhstan, if the world moves forward with protecting more marine areas, and whether countries include ocean-based action in their new national climate plans (known as nationally determined contributions, or NDCs).

Ten years ago, countries established the Aichi Targets, 20 global biodiversity goals to be achieved by 2020, such as cutting natural habitat loss in half. It’s now 2020 and we’ve largely failed to achieve our goals. Natural habitat loss doubled over the past 10 years. Roughly 1 million species are threatened with extinction.

Countries will gather at the UN biodiversity conference in Kunming, China in October, a once-in-a-decade event, to establish the next round of targets. Watch to see if the goals are credible, achievable and will hold countries accountable for their commitments. A global commitment to conserve 30% of the world’s land and sea would be ideal. As host of the event and a mega-consumer, China has a key role to play. Will it set ambitious natural resource targets that inspire action from others?

It’s clear that climate trends are going in the wrong direction. Scientists say that emissions will need to halve by 2030 and reach net zero by 2050 to avert the worst climate impacts. Instead, carbon dioxide emissions from fossil fuels reached an all-time high in 2019.

COP26, the UN climate conference in Glasgow this year, can be a key moment to spur momentum. In the run-up, watch to see if countries make long-term commitments to reach net-zero emissions by 2050 and short-term commitments to enhance their NDCs this year. Current NDCs put the world on a path to warm 3-4 degrees C (5.4-7.2 degrees F) by 2050, when we need to reduce emissions enough to limit temperature rise to well below 2 degrees C  (3.6 degrees F).

“The problems we face cannot be solved by any individual actors, or individual countries,” Steer said. “They require collective action.”

While 108 countries committed to strengthen their national climate plans before COP26, they represent only 15.1% of global emissions. We need major emitters to similarly step up – most importantly, China, the United States, the EU and India, which collectively produce 50% of emissions.

China can be bolder by peaking its emissions before 2030 and greening its Belt and Road Initiative. India has set ambitious renewable energy targets but can surpass expectations by reducing coal use and scaling up electric vehicles. The EU’s Green Deal is promising, but it will need to gain traction and encourage others to follow. U.S. states, cities and businesses are reducing emissions despite environmental rollbacks from the Trump administration, but federal action is imperative. The outcome of the U.S. presidential election in November will be significant, both for national climate action and for whether the country stays in the Paris Agreement.

The financial risks of climate change were glaring over the past decade, with climate disasters costing $650 billion in the last three years. Despite some encouraging signs, like increased sustainable investments and some financial institutions avoiding fossil fuels, markets still aren’t fully aligned with a low-carbon economy.

Key decisions to watch this year include whether financial regulators push for more environmentally sustainable investments, and if development banks align their portfolios with Paris Agreement goals. Finance ministers can and should help strengthen NDCs through carbon prices and other green fiscal policies. Bank of England Governor Mark Carney could be influential as the new UN Special Envoy for Climate Action and Finance.

As in the financial markets, the business sector has made progress on sustainability, but not nearly enough. Consumers are demanding more sustainable products, and yet consumerism is still draining natural resources 1.75 faster than the planet can replenish them. More and more companies are committing to eliminate deforestation from their supply chains, and yet 5 million hectares (12 million acres) of forest – an area of land the size of Denmark – are destroyed for commodities every year.

A key tipping point would be if 1,000 companies commit to set science-based emissions-reduction targets by COP26. So far, 750 have pledged to reduce their emissions enough to keep temperature rise below 2 degrees C (3.6 degrees F). Watch for similar science-based commitments for biodiversity, land, water use and other sustainability challenges. Also watch to see if trade associations shift their approach to align with climate goals.

Scaling up proven technologies can help reduce emissions faster and on a grander scale. For example, expanding the fleet of electric vehicles and the supply of renewable energy can accelerate the shift away from fossil fuels. Chinese cities have already boosted their electric vehicle fleets. Watch for 1,100 new e-buses in Chile and Bogota, the beginning of a 100,000-EV fleet from Amazon, and new electric trucks from Ford. At the same time, battery storage for renewables is expected to grow by 3 gigawatts in the United States.

Exciting developments are also expected from emerging technologies. Plans for the world’s largest direct air capture plant – designed to remove carbon dioxide from the atmosphere – are underway. Carbon removal is essential for achieving net-zero emissions by 2050; this plant can help better establish the technology necessary to do so. Electric aircraft is being tested. And the first zero-emission gas power plant is moving toward deployment.

Technological development is especially important and easier than you might think for hard-to-abate sectors like fossil fuels, steel and cement. Research shows that decarbonizing these sectors will only cost 0.5% of global GDP by 2050. Watch to see if industries invest in the innovation needed to lower their impact.

There’s been an explosion of climate activism in recent years, including Extinction Rebellion, Fridays for the Future, and more than 7 million people marching in 185 countries over just one week in September 2019. “We’re now seeing people power like we haven’t seen since the 1970s,” said Steer.

Many of these activists aren’t just demanding climate action; they’re fighting for justice. Climate change is inherently an issue of inequality: The world’s richest 10% produce half of all greenhouse gas emissions, while the poorest feel the impacts most acutely. And climate policies can cut both ways: When designed right, they can lift people out of poverty and foster equality. When designed poorly, they unduly burden communities, especially marginalized groups. We’ve seen the result of such unintended consequences in recent years with protests in France and Chile, which were in part a response to fuel and transportation fare hikes.

Fifteen countries including the UK declared “climate emergencies,” in large part due to citizen uprisings. We’ll need to see if this activism leads to concrete political change.  Watch to see if countries address the concept of a “just transition” in their national climate plans and at COP26.

The sustainability challenges to be grappled with this decade are major, far-reaching and interrelated. No individual actor will be able to solve them. Collective action – with all five actors working together, supporting each other, and inspiring greater ambition – is essential for making any sort of progress.

“The 2020s are the make-or-break decade,” said Steer. “We say this every decade, but this time it really is true.”

We’ll be watching to see how these stories transpire throughout the coming year. In 2030, let’s hope we can look back on 2020 as the turning point for sustainability, not the year we locked in dangerous levels of warming.

Sarah Parsons is the Senior Editor for World Resources Institute.